What's Next for China's Property Playground? 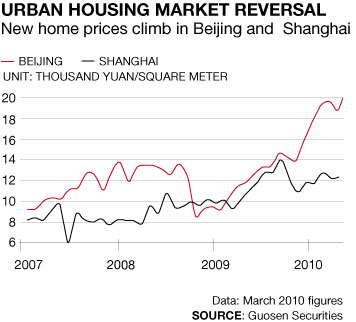 Many of these speculators balked when housing prices rallied nationwide following the annual legislative sessions of the National People's Congress and Chinese People's Political Consultative Conference in March.

Another cluster of speculation has been playing off government measures designed to de-stress what many see as a dangerous price bubble. Speculators who've stayed in the game after betting on higher housing prices for 2010 have been benefiting in recent months as buyers paid more in big markets such as Beijing.


Meanwhile, a new arena for speculation is emerging in second- and third-tier cities targeted by developers who've been relentlessly hunting for fresh, profitable territory.

And so the game goes, with speculators of all stripes, from daring developers to cautious investors, taking turns at rolling the dice. What's next for China's property market is anyone's guess.

Beijing's housing prices have now reached historic highs – up 40 percent since 2007. The average residential sale in Beijing exceeded 26,000 yuan per square meter in March, an increase of 59.5 percent year-on-year and up 16 percent from the previous month.

Price blowouts were common in other major cities during the last week of March as well. Many developers have decided to push hard for sales in the first half of 2010, said one developer sales person, whose company "sells as soon as we finish construction. We don't wait."

Some developers are concerned about the sustainability of high prices, and many have stopped acquiring land in Beijing, Shanghai and other first-tier markets. Many have predicted a partial adjustment during the second half of the year.

In Shenzhen, considered a mirror of the nationwide market, the number of transactions for new housing rose 178 percent in March. But the average price fell 16 percent to 20,433 yuan per square meter.

In Hainan Province – a target of massive speculation since January – weaknesses have started to become apparent. Residential sales in the provincial capital Haikou, for example, fell 37 percent in March. And many investors are on the sidelines.

Great Wall Securities analyst Liu Kun has predicted another 20 percent rise in nationwide property prices before a turning point is reached, probably in May. Other analysts say prices may rise for another six months to a year.

But the uncertainty over how prices will trend in the near future is dwarfed by a broader question: Why are prices climbing at all? The answer is that no one knows.

"The scariest thing is that one simply can't find a reason for soaring prices for many building complexes," lamented one real estate industry veteran.

An analyst at the real estate consultancy DTZ Debenham Tie Leung said a general sentiment is that prices are now rising out of control, and without reason.

Some in the industry see the seller's market as proof that Chinese investors are buying property in a panic, hoping to protect the value of their assets in an atmosphere of loose liquidity tied to a massive influx of credit in 2009.

And yet other analysts say "bubble" doesn't necessarily mean "bad." Zhang Hong, president of Beijing BrilliantStone Investment Consulting Co., agrees China has a big real estate bubble. But he says it's an extremely resilient bubble that could last.

Several factors seem to support faith in the bubble's lasting strength. Housing demand is growing rapidly, some say the yuan has not appreciated to its potential level, foreign investment in the housing market is restricted, and China's urbanization process is on the rise.

Most real estate professionals forecast "upward pressure on housing prices for the next 20 years," saying steady demand for housing will keep elements of downward pricing pressure at bay.

Government regulators since the end of 2009 have registered concern toward possible risks tied to the real estate bubble by unveiling new, tightened or re-emphasized controls. But few of these steps had been undertaken to the extent expected.

The China Securities Regulatory Commission delayed allowing property developers access to capital markets for financing, and cautiously recommended real estate and eight other types of companies to list on the Growth Enterprise Board. And the State-owned Assets Supervision and Administration Commission ordered 78 centrally administered state-owned enterprises that are not primarily engaged in the real estate business to draft exit plans.

Apparent foot-dragging on some of these measures prompted market observers to doubt regulatory sincerity toward restricting the property balloon.

Many say "squeezing the bubble" is destined to be a painful process, especially for the Chinese government. And some in the market say the government is using control measures as a ruse, like the boy who cried wolf.

"Real estate is a pillar industry," a real estate agent told Caixin. "Local and central (government) finances rely on it, so why would the government knock down prices?

"This year the government has only said that it will curb the overly rapid rise in housing prices in some cities," the agent noted.

A Ministry of Land and Resources (MLR) report in early April asserted that real estate markets in Beijing, Shanghai and other cities had "clearly deviated from the normal return on investment for a rational investor," and that the central government would introduce a series of control measures to rectify the situation.

Of course, every investor everywhere hopes to be nimble and clairvoyant enough get out at the right time, perhaps just before a bubble bursts. Most are caught off guard when a straw finally breaks the camel's back, but that doesn't prevent them from trying to win the game.

Many optimistic real estate investors in China are now looking to the central bank to tighten monetary policy by, for example, hiking interest rates. It's thought that raising interest rates is the most effective tool for controlling housing prices.

Investors are debating whether the government has the resolve to apply brakes through its power over monetary policy, taxation and land use. Yet most agree that the government would find it much easier to suppress housing prices than lift an entire market from an abyss.

Keeping a lid on prices before a bubble begins in second- and third-tier cities was apparently behind a March 22 statement by Yun Xiaosu, MLR deputy minister. He said housing price fluctuations must be controlled in cities outside major urban centers.

A few days later, an MLR report repeated Yun's theme while acknowledging that substantial increases in land development costs in first-tier cities would push development demand to the second and third tiers.

Nevertheless, the government may find it more difficult to introduce controls after these markets are pulled into the national market bubble – which may have already happened. Developers and funds seeking shelter from a first-tier bubble burst have apparently encouraged explosive price increases in second- and third-tier housing markets.

"Rising housing prices in second and third-tier cities may very well be the end to China's decade of sustained price increases," said a real estate developer in the Yangtze River Delta.