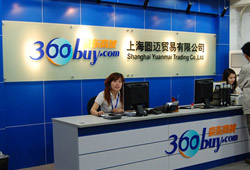 (Beijing) - China's two major online retailers, Dangdang.com and 360buy.com, have seen a price war in the offing over discounts in online book vending.

The battle was begun through volleys of online arguments between the heads of the two companies. On late December 10, Li Guoqing, chief executive officer of Dangdang, said in an online post that the company, China's leading online bookseller, "will be ready for price wars at any time," shortly after the company offered attractive discounts for its customers to celebrate its successful initial public offering (IPO) in New York this December.

Li's statement soon received a response from its major rival, 360buy.com. Liu Qiangdong, chief executive officer of 360buy, said on his blog post that all of the company's books "will be 20 percent cheaper than its rivals, starting from December 14."

360buy, which is China's biggest business to customer (B2C) company, officially launched its online book vending service on November 1, expanding its business from electronics to a wider array of consumer retail.

On December 13, Dangdang's Li wrote on his blog, "our price index survey has shown that we are offering the cheapest prices online. And who delivers faster than us?"

360buy's Liu responded in his blog on December 14 that the company is now offering discounts to its customers as promised and it would be willing to further cut prices.

Although Liu stated that the price cuts are not aimed specifically at its rival, Dangdang, but are part of "fair competition." Market concerns have risen that a price war will eventually begin to distort the online book vending market, with effects that will filter down to different parties in the supply chain, from writers to sellers.

Some analysts said that in the long-term, the employing a low price strategy will squeeze the profits of the publishing industry as a whole, and threaten the survival of individual bookstores. Moreover, price cuts regardless of costs will hurt the profit capacity of book sellers in the long run, despite increasing sales volume.

Dangdang currently offers 600,000 books on its website, while 360buy sells 220,000. According to Dangdang's IPO prospectus, the company's fourth quarter book sales are expected to reach 441.8 million yuan, with daily transactions worth 4.9 million yuan.

In addition to the fierce battle in the book market, 360buy, which has long relied on low price strategy to attract customers, is also facing challenges from rivals in the electronic retailing sector, including Gome and Suning.

Local media outlets reported that Gome and Suning are in talks with appliance suppliers to reduce supplies to 360buy, accusing the online seller for violating market rules by offering below-market prices.