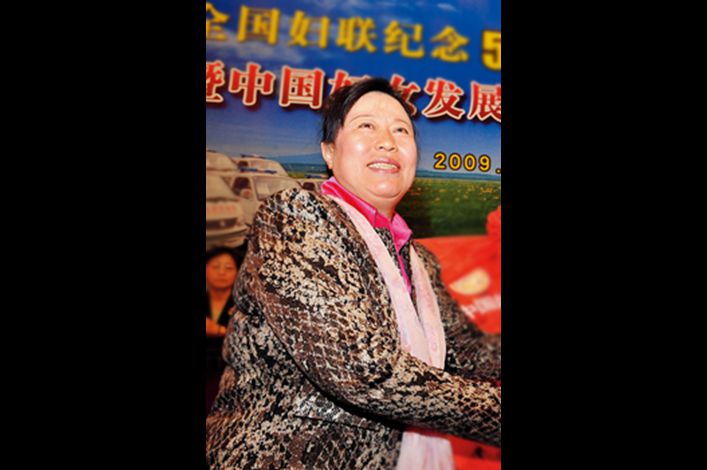 Ding Shumiao is a successful businesswoman, celebrated philanthropist and so well-connected that more than 400 central government and Communist Party leaders attended a huge Spring Festival celebration in early 2010 sponsored by her coal-railway-advertising conglomerate.

So when news recently emerged that government investigators were looking into Ding's finances and railway investments, a shiver went through the highest ranks of the nation's railway and coal industries.

Caixin learned from several sources that authorities in Beijing are probing Ding. Whether police agencies are involved is unclear. Neither is it certain whether her high-level network of personal connections may offer a degree of protection.

Ding, 55, is also a member of the Shanxi Province branch of the Chinese People's Political Consultative Conference.

After Ding came under an investigative cloud, several sources expressed concern about her "complicated" connections to top officials. Some said the case "may involve something much bigger."

Internet bloggers as well have been torn over whether to continue praising Ding for her generosity or question her business and investment decisions. Some 90 million yuan in donations in 2009 earned her the No. 6 ranking on the Forbes magazine China Charity List last May. She also pals with show business celebrities at charity events.

But questions have swirled around her successful enterprise Shanxi Jinhande, whose name was recently change to CREC Taikete Environmental Engineering Co. Ltd., and which has won lucrative contracts to supply noise barriers that line China's high-speed railway tracks.

BroadUnion's transfer last September of 35 percent of its shares in then-Jinhande to China CREC Railway Electrification Bureau Group, an electric rail contractor but remains the controller of the company.

Any possible financial misdeeds connected to Jinhande, however, would involve only a fraction of Ding's business. Beyond noise barrier manufacturing, her business empire spans coal shipping, track building and railway station advertising.

A fitting symbol of Ding's flash and power are giant LED screens hanging high at Beijing's recently opened South Railway Station. The signage is operated by GOTO Media, a BroadUnion subsidiary, whose registered capital rose to 100 million yuan in early 2010.

Ding, 55, made her fortune as a coal transporter. She was born in a remote Shanxi Province village where coal and coalbed methane are king, and in the 1980s launched a coal transportation business.

In 2000, she moved to Beijing and started BroadUnion as the parent for coal shipping and other businesses. In 2003, she founded Zhongqi Coal Electricity Co. Ltd., which claims annual thermal coal sales of 4 million tons and a railway transportation capacity of more than 500 trains. Zhongqi reported earnings of 50 million yuan by December 2010.

With registered capital of 120 million yuan, the BroadUnion group quickly expanded its assets.

Shanxi Jinhande Environment Equipment Co. Ltd. was established in September 2006 and was soon one of the country's leading noise barrier designer and supplier.

The barrier businesses benefited substantially from BroadUnion's stakes in the Wuhan-Guangzhou, Zhengzhou-Xi'an and Guangzhou-Shenzhen-Hong Kong express railway projects, which were launched in 2009. The cost of noise prevention for these three projects alone was originally set at 530 million yuan, but later rose to 610 million yuan. Ding's companies got all the contracts.

Another successful BroadUnion business began in 2006 with approval from the Ministry of Railways: Zhibo Traffic & Transport Equipment Co. Ltd., which was created with 150 million yuan in registered capital as a venture of BroadUnion.

BroadUnion also has a 45 percent stake in the Beijing Bohao Radegast Hotel, which opened in July 2008, on the eve of the Summer Olympics in Beijing. The hotel was the scene of the company's Spring Festival 2010 blowout for some of China's highest-ranking leaders.

In 2008, Jinhande won the bid for China's first express railway project – Beijing-Tianjin Intercity Railway. CREC and Jinhande submitted winning bids for the line's noise barrier as well as barriers for a Hefei-Wuhan railway. The contracts were worth a combined 836 million yuan.

In 2009, Ding's company beat Shanxi Yufeng Railway Construction & Investment Co. Ltd. for a contract to build a 65-kilometer coal railway in Shanxi for 2.3 billion yuan. The new tracks, called the Jianan line, connects the Taiyuan-Jiaozuo and Houma-Yueshan lines, which are important gateways for shipping Shanxi coal to the rest of China.

BroadUnion has spread its wings into overseas markets as well. For example, Zhibo collaborated with an Italian company called Lucchini in a joint-venture Zhibo & Lucchini Railway Equipment Co. Ltd., China's only producer and maintainer of motor train wheelsets. Launched in 2007 with 150 million yuan in registered capital, Zhibo & Lucchini has attracted 1.1 billion yuan in investment. Zhibo has a 75 percent stake.

Zhibo & Lucchini's production line opened in February 2009. Since then, 2 billion yuan worth of contracts have been signed with several enterprises including Qingdao Sifang Locomotive and Rolling Stock Inc.