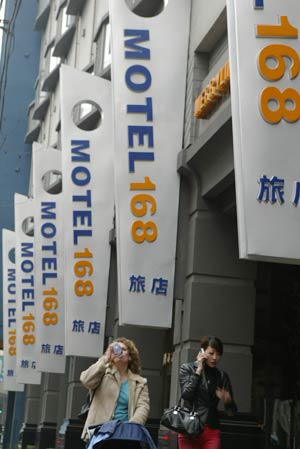 Morgan Stanley is selling its majority stake – along with the rest of the equity – in China's fifth-largest budget hotel chain, Shanghai Motel Chain Co.

A bidding process for 100 percent of the nationwide network of 276 hotels and more than 40,000 rooms began in early February when several rival hoteliers and private equity funds expressed interest.

Morgan Stanley's financial consultant, Goldman Sachs, says the company is worth about US$ 1 billion – a price some call unreasonably steep. Most potential buyers have been tight-lipped about the bidding.

Jinjiang Inn participated in the first round of bidding but withdrew because, company President Xu Zurong told Caixin, Jinjiang and Motel Chain currently compete directly in cities around the country and a buyout "would not produce any noticeable results." A securities researcher, however, said Jinjiang decided Morgan Stanley's asking price was too high.

Morgan Stanley plans to sell its entire 59 percent stake in Motel Chain, which it gradually built from an initial investment in 2006, as well as the 30 percent held by company founder and current CEO Shen Feiyu, and the rest of the equity currently in senior management hands.

Most financial analysts think the chain is worth far less than the consultant's US$ 1 billion valuation. A source close to the bidders told Caixin most potential investors estimate the value at between US$ 300 and 400 million.