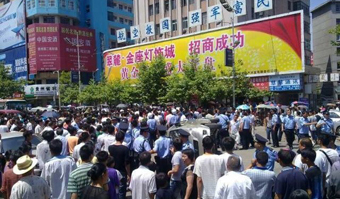 (Beijing) – Thousands of angry local residents clashed with city authorities following the death of a disabled fruit vendor, after being allegedly beaten by urban management officials in southwest China's Guizhou Province, according to a report by China Daily on July 27.

The news was first circulated on Chinese microblogs that described the beating of an unidentified fruit vendor by two urban management officers, also known as chengguan, during a raid on illegal street businesses in Anshun City on July 26.

The fruit vendor died in front of the gate of a market at Nanhua Road, Xinxiu District of Anshun City, at about 1:43 pm in the day, which led to the gathering of "a crowd", according to an official statement from the city's emergency relief office on the municipal government's website posted the same day.

No other details of the incident were released in the statement.

The middle-aged street vender, with a false leg, was confirmed dead on site after an ambulance arrived. Chengguan officers who had chased him were suspected of beating the vendor to death, some microblogs citied witnesses as saying.

The photos attached to relevant microblog postings showed a disabled man lying on the ground in a torn t-shirt with a walking stick at his right hand, surrounded by a crowd.

Photos and video of a severely damaged chengguan vehicle, on its side with back doors ripped off and smashed windows, were widely circulated online.

Anshun municipal authorities opened an investigation in the case according to an official statement issued on July 26.