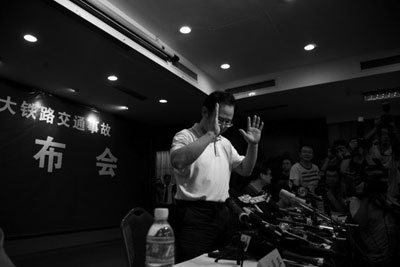 (Beijing) – China's Ministry of Railways said on August 16 that it had dismissed its spokesman, Wang Yongping. A source from the ministry said Wang has been appointed to the represent a railway construction project in Poland.


Wang, the fourth senior official to be fired after the deadly train crash on July 23, stirred public ire at a press conference following the tragedy.

"The situation at the rescue site was very complicated," Wang said at the news conference on June 24. "So the rescuers decided to bury the train's carriages to make their work easier. Whether you believe or not, I believe it anyway," he said.

The July 23 collision of two bullet trains in Wenzhou left at least 40 dead and over 190 injured.