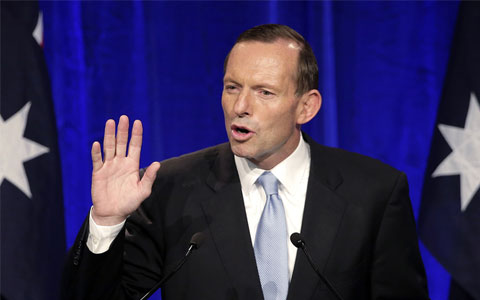 If there is a compelling international lesson of the last half century it is that trade improves understanding between nations. Every time one person freely trades with another, wealth increases; and when wealth increases, countries grow stronger.

International trade builds the economies of two countries, the seller and the buyer, and makes both of them stronger and more secure.

Fostering freer trade is part of my government's economic plan, and in just over a week, I will lead trade missions to China, South Korea and Japan. This will be my first official visit to North Asia, and it's happening very early in the new government's term.

Australia understands the economic transformation that is occurring within the region.

The global middle class is projected to grow from 1.8 billion to over 3 billion by 2020 – and most of that growth will occur in Asia.

Asia will generate about half the growth in global output between now and 2030.

There is, of course, no law of nature saying that the Asian middle class must buy the products of Australian manufacturers, must use our services, must study at our colleges, or must visit our tourist destinations.

Just because Asian countries have found Australia a good supplier in the past, doesn't mean they will inevitably do so in the future.

That's why my government is doing everything it can to complete free trade agreements with our top three export markets of China, Japan and South Korea.

While in China, I hope to announce substantial progress towards freer trade. Because free trade agreements mean little without businesses willing to make the most of them, Australia will be holding the inaugural Australia Week in China.

Supporting the week will be the largest overseas business delegation ever assembled by the Australian government, including financial services, food and agribusiness, and manufacturing.

Australia Week in China represents an unprecedented level of focus and partnership with local Chinese businesses – where Australian exports increased by over AU$ 2 billion in the last year.

As liberalization spreads from the economy into other elements of Chinese life, I am confident that Australia will be a valued friend and strategic partner, as well as a rock-solid-reliable economic partner, to the Chinese government and people.

With a combined population of 1.5 billion and a GDP of AU$ 15 trillion, China, Japan, and Korea have decisively shifted the world's centre of economic gravity.

It is telling that on the eve of my trip, Chinese and Japanese military aircraft are together searching the southern Indian Ocean under the coordination of the Australian Maritime Safety Authority. South Korean aircraft are also on their way.

In the search for Flight 370, the countries of our region have demonstrated an ability to work together for a good cause.

Deep down, what peoples have in common is more important than anything that divides us. Certainly, we are all much stronger and more successful working together than working against each other.

Australians are only too aware that our prosperity depends upon the continued growth and strength of China, Japan and South Korea. But those countries are among each other's largest trading partners too. Anything that damages any one of them damages all of them.

Obviously, my objective is to strengthen Australia's ties with all our friends in North Asia. My predecessor, John Howard, often remarked that Australia did not have to choose between its history and its geography. My message is that making new friends doesn't mean losing old ones.

This harmony was on display when the Chinese and U.S. presidents addressed the Australian Parliament on successive days in 2003.

As Australia and the nations of Asia engage in more trade, we will see a reinforcing cycle of investment, growth, innovation and prosperity.

It would be an unspeakable tragedy were this to be jeopardized by territorial conflicts based on the shadows of the past.

This year not only sees Australia chairing the G20, but China chairing Asia-Pacific Economic Cooperation forum. I am keen to work together with all our partners in the cause of freer trade, more efficient markets, more effective regulation, more modern infrastructure and more widely shared prosperity.

Of course, for millions of Australians, the countries of Asia are family, through the ties of ancestry, marriage and migration. These bonds are to be nurtured just as much as the bonds of trade and commerce.

These bonds rest on decades of strategic stability in our region. Australia's relationships with Japan, South Korea and China, are not mutually exclusive, but complementary.

We are in the right place, at the right time, with the right spirit. Australia will work with our partners to seize this moment.

Tony Abbott is the prime minister of Australia