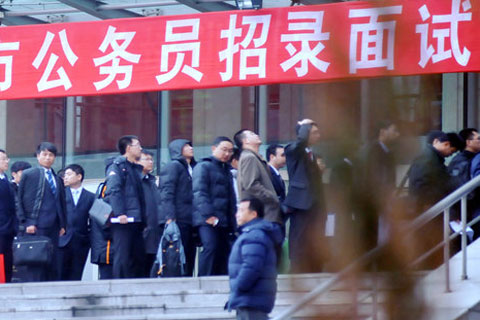 (Beijing) – Fifteen of the 23 provinces and regions that had published data on recruiting of civil servants by March 26 had fewer job openings this year, and the number of applicants for testing also fell.

The drop was most severe in the eastern province of Zhejiang, where provincial- and lower-level governments planned to recruit only 8,995 civil servants from roughly 227,000 applicants. Last year, there were nearly 10,500 jobs and 360,000 people competed for them.

Local governments have cut back on recruiting probably because Premier Li Keqiang recently said there should be fewer people on the government's payroll, said Bai Zhili, associate dean of Peking University's School of Government.

Li said at a press conference during the dual meetings of the legislature and top political advisory body in March that the central government should set an example for local authorities by reducing its number of employees. He said the money saved should be used to improve people's livelihoods.

Bai said that despite the falling figures, government employment was still popular with jobseekers, as the number of applicants is still quite large.

"China has reached rapid economic development but it is yet to achieve full employment," he said. "The pressure of finding a job is the primary reason many people want to be a civil servant."

The popularity of government jobs reflects a lack of confidence in private businesses, Bai said. Private enterprises in developed countries usually pay better than the government, Bai said, so they have a recruiting advantage.

Whether that will also be the case in China depends on how effectively reforms can free the initiative and energy of entrepreneurs and private businesses, he said. "The appeal of jobs in private companies will significantly improve as long as the companies can have greater room for growth."