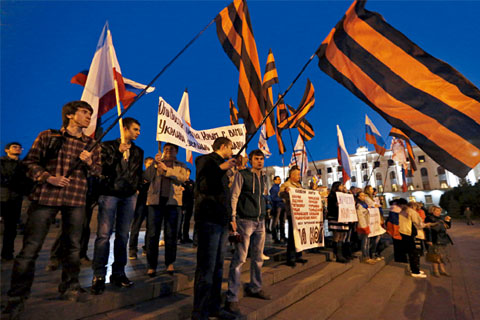 At the Sochi Winter Olympics, President Xi Jinping professed his affection for Russian letters. Pushkin, Lermontov, Gogol and other literary giants made up the reading list of his youth, and his generation was raised on a diet of Russian culture. Ah, those lovely summer nights when young people crooned Katyusha in Chinese.

It is more style than substance. However, the lovefest would have continued if not for Ukraine. China could not have imagined that Ukraine would spin out of the orbit from a resurgent Russia on the world stage. Last December, then president Viktor Yanukovych visited China and clinched mega business deals with generous financing and a "strategic partnership" in which China went as far as promising to shelter Ukraine under its nuclear umbrella.

Within months, Yanukovych fled his country. It was another debacle after dubious judgment sank Chinese investments in Libya and Myanmar. How could China so misread the deteriorating situation in Ukraine? The embarrassingly ill-prepared response to the conflicts raised questions over China's readiness to assume leadership in global hot spots. A lot of China's prestige as the rising global power hangs on how it handles the situation.

As Ukraine's second largest trading partner, China buys military hardware, leases farmland and invests in the country's infrastructure, from roads to port facilities. China's top-notch international affairs analysts have a good understanding of Ukraine's geopolitical importance and ethnic complexity, but policymakers seem to have been blind-sided by the assumption that Russia has a firm grip on Ukraine as a buffer state. They see Russia an indispensable ally for China's rise to greatness. Russia's president, Vladimir Putin, is looked up to as a comrade in arms to fight American obstructionism. Without the Russian cooperation, the Shanghai Cooperation Organization cannot hold together; the BRICS block of five emerging economies will not be able to act in concert; and China's vision of a multi-polar world will lose the critical counterweight to America.

As the Maidan Square protests unfolded, Chinese state media attributed the troubles to economic mismanagement in Ukraine and went into a chest-thumping mode to declare that China, with its economy in superb shape, is immune to turbulence.

The crisis in Crimea puts the Chinese government in a tough spot. The local referendum and violation of Ukraine's sovereignty by Russia have serious implications for the prospect of self-determination in Taiwan and in the restive border regions. Beijing avoids taking sides, but the public is not satisfied with the tired non-interventionist rhetoric. The Global Times, a unit of the People's Daily, casts the dramatic turn of events as a tug-of-war between Russia and the United States. Russia acted the way it was because it had been driven to these actions by years of being squeezed and plundered by the United States and Western countries. Putin, at last, put the instigators of the "color revolution," on notice and it is important to show to the world that Russia is not alone in its fight to assert itself.

Hu Xijin, the Global Times' pugnacious editor-in-chief, has a knack for churning up the chauvinistic sentiment to justify government actions. His jingoism is often quite effective, but this time, he overplays his hand. Russian expansionism triggers painful memories among the Chinese, and past grievances are too powerful to consign to the dustbin of history as he vigorously urges.

At the root is an existential issue for the Chinese: which is the greater menace – gunboats from the sea or the hordes from the steppe? In the Opium Wars, China was laid low by maritime enemies from the east, but Russia has always loomed large across the country's longest land border to the north. A heated debate over national security in the 1870s pitted coastal defense against frontier defense. In the end, the advocates of frontier defense won.

The propaganda apparatus in the 1950s could hoodwink people into believing that it was in China's best interest to join forces with Soviet Russia to fight the Western imperialists. Times have changed. For the Chinese, fool me once, shame on you; fool me twice, shame on me.