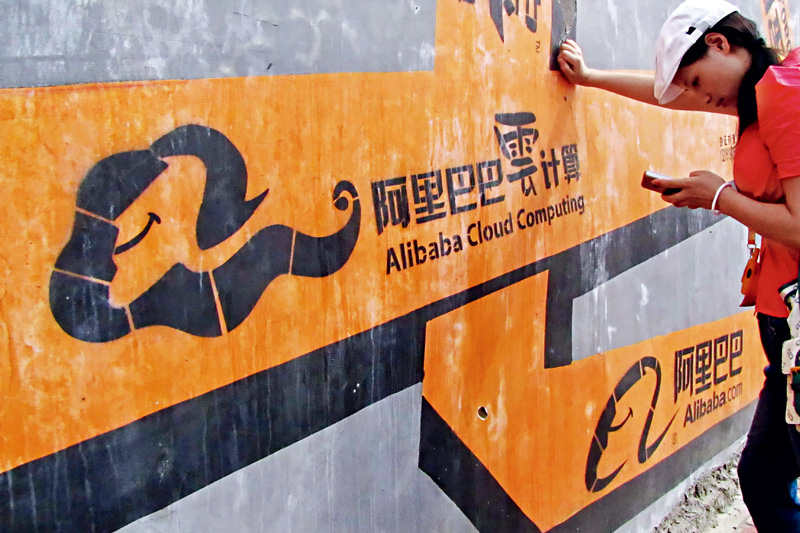 (Beijing) – Alibaba Group Holding Ltd. and its wealth of data on online vendors and shoppers has for a long time inspired imaginations for how big data technologies can reshape life on the Internet and beyond.

The e-commerce giant has been using advanced data-analyzing technologies to help extend small loans since 2010, paving the way for clouding computing services that aim to commercialize its computing power.

It launched a service on July 8, lifting the veil on the technologies and offering a glimpse into how other companies can make use of them. The Open Data Processing Service (ODPS) allows users to remotely tap into Alibaba servers equipped with algorithms that, according to the company, can process 100 million high-definition movies' worth of data in six hours.

Using the ODPS is like using a juicer, an executive of the firm's cloud computing arm that manages the service said.

"You feed parameters to the program and turn on the tap for the juice to flow, with the results varying depending on the raw data and the computing algorithms," the executive said.

The service has been tried out by Aliloans, Alibaba's small loan unit, which uses the technology to evaluate lending risk and grant loans to vendors and companies using the firm's shopping websites.

This has significantly cut the cost of making loans below what it costs banks while keeping bad loans under control, the firm's data shows.

Every loan costs 0.3 yuan, roughly one-thousandth of what a traditional loan by a bank would cost, the firm said. Bad loans recently accounted for about 1.3 percent of its total, slightly higher than the banking industry's average of around 1 percent.

All of the loans Alibaba's small-loan unit extended are unsecured, meaning they do not require any collateral. This makes pre-lending risk assessment particularly important because if a borrower defaults on a loan, there are no assets the lender can seize.

To evaluate the lending risk, the ODPS draws on data from Alibaba's shopping websites and Alipay, the e-commerce company said. Alipay, the country's largest third-party payment service, is operated by a firm related to Alibaba.

A typical day of operations would see the program use more than 100 computing models to process over 80 billion data entries, such as the borrower's credit rating and customer reviews, to form conclusions about its willingness and ability to repay loans.

More than 70 people work on developing models for ODPS in the small-loan business, and all decisions regarding whether to grant a loan are made by the system without human intervention, said Lou Jianxun, general manager of Alibaba's small and micro-business financial service department.

ODPS can handle more than just loans. One of its algorithms, according to a company insider familiar with the system, allows Aliloans to spot vendors who have been too aggressive in certain fields and lagging in others by evaluating a mix of data including their promotional campaigns and profit margins.

Based on the results, Aliloans can come up with suggestions for how the vendors need to adjust their operations and provide financial support accordingly, the source said.

Another model, developed in 2012, allows Aliloans to pace lending more effectively, the source said. Before it was applied, the traditional wisdom of banking would see credit for companies tighten in July and August when sales are usually slower. But the model found that it was also during that time that many companies need to increase stock in preparation for big promotions later in the year.

This allows Aliloans to step up lending to certain borrowers even though their sales were not particularly strong at the time, the company source familiar with ODPS said.

He also credits the new technology with expanding Aliloans' reach to small sellers. In the beginning of 2012, only about 300,000 to 400,000 sellers on Alibaba's websites had access to Aliloans at any given time, but the figure has risen to more than 3 million.

"Even vendors that are in business for only two or three months can have a credit line," the company source said.

The service analyzes data from China UMS' point-of-sale machine installed at shops, restaurants and other places, then grants loans of up to 500,000 yuan if the result shows the borrower is qualified.

"Banks' data, however, is no match for Alibaba's because they are not as diverse, including only the amount of payments and locations, but not information about the goods and services," the source said.

Alibaba's big data ambitions run beyond banking. In 2013, it invited Shenzhen-based BGI, the world's largest genomics research institute, to try out ODPS. The experiment cut the time needed to sequence genes to one-tenth of that required by traditional methods, the firm said.

"In case in the future there is an outbreak of a biohazard crisis, humanity has won some precious decoding time," Alibaba said in an open letter.

In May, Alipay launched a pilot program in a hospital for women and children in Guangzhou, the capital of the southern province of Guangdong. The service aims to build a digital file for every patient that connects their medical history and latest examination reports with their social security insurance, and also to incorporate it with a tool to make visiting doctors easier.

The program also aims to track drugs from production to distribution. All data is fed into the ODPS and a regulator would be notified if the system finds any abnormality suggesting fraud or other problems, the firm said.

Alipay said it is also looking into cooperation with public transportation companies. By permitting users to pay for bus tickets with a smartphone that has an Alipay app, it can monitor the movements of people in 35 cities. Feeding the data into ODPS should allow it to advise bus operators on improving routes and cutting traffic, Alipay said.

Alibaba's cloud computing subsidiary also reached an agreement in May to share data about weather forecasts, so messages such as flood warnings can be sent to drivers' phones with recommended alternative routes shown on a map, the firm said.

For all the great ambitions, however, it is still too early to judge whether those goals can be reached. Jack Ma, Alibaba's co-founder, has said the e-commerce giant's business focus will shift to data mining, but this is a long road.