Formerly a Brother, Many in Myanmar Now See China as a Big Bother 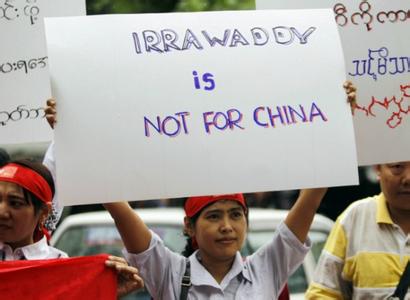 (Rangoon) – Myanmar's government made a rare concession to its people in 2011 by suspending a controversial water power project financed and led by a Chinese state-owned enterprise. Now it is finding the voices critical of its northern neighbor growing louder and harder to brush aside.

The Myitsone Dam was being built on the Irrawaddy River, the largest waterway in the Southeast Asian country that used to be called Burma. The people of Myanmar view the river, which runs from the north to the south of their country, as the cradle of their civilization and felt exploited by the project.

China would have received 90 percent of the electricity generated. Environmentalists also opposed the project.

The dam may not have been a wise investment for Myanmar judging solely on economic terms, said Win Myo Thu, general manager of EcoDev, an environmental protection group in Myanmar. The country's fledgling democracy is too young to handle such a project, he said. The planned cost was US$ 3.6 billion, but it is not unusual for big projects like this to run over-budget. For China, that may not be a big problem, but it could be a heavy blow to Myanmar's economy, he said.

Building the dam also requires relocating the indigenous population. "For those living in distant villages who rely heavily on farming for a living, the risk of being forced to part with their land has left them with few choices," Ei Ei Min, founder of non-governmental organization Point, which advocates for minority group rights.

Many people in Myanmar are also hostile to other Chinese-backed infrastructure investments, she said, because the Chinese side deals only with the government regardless of how that will affect the people.

"As long as they can reach an agreement with the government, they can do whatever they want," she said.

Critics in Myanmar have also opposed the building of pipelines transporting oil and gas from the country's western deep-water port of Kyaukphyu to Kunming, the capital of China's southwestern province of Yunnan, which borders Myanmar.

Protests have occurred over disputes involving compensation to the locals and worries about environmental hazards. The project ground to a halt last year, after most work in Myanmar was done.

The dam episode underscored the former British colony's shift in attitude toward China, which until several years ago had been embraced by the former military government as a close trading partner and investor. This was especially so after Western countries imposed sanctions on the junta following its crackdown on democratic movements in 1988.

Ordinary people in Myanmar blame China and its relationship with the military government, which ruled until 2010, for blocking interventions by developed countries, Win Myo Thu said.

"Every time the United Nations' Security Council voted on whether or not to punish the old government, China always exercised its veto power," he said. "That makes the Burmese feel that the military junta was able to survive this long and continue to suppress them because of China."

Things have begun to change. A new government, formed in 2010 through elections under a revised constitution, has made reforms to boost democracy and allow people to speak out more freely, including voicing anger toward China. These criticisms have been increasingly common online and in articles in non-official media outlets.

Chinese migrants started arriving in Myanmar in large numbers in the 1990s. Many of the locals do not like them, blaming them for higher costs of living. Some also voice fears the foreigners threaten their way of life.

In Mandalay, Myanmar's second-largest city and its cultural center, official data shows at least 400,000 residents are Chinese migrants or their descendants. The locals said they are seeing more and more ads in Chinese characters.

Residents in Rangoon, Myanmar's former capital and its largest city, said they were wary of imports from China.

Intellectuals tried to boycott Chinese goods several times a few years ago, but none received much support, one woman said.

"Chinese goods are cheap, and we are poor," she said. "We do not want to buy them because we know they are flimsy, but we have no other choice."

Said a graduate student majoring in international relations: "China stands to benefit more from the trade because they sell us cheap goods and some of them are not even healthy."

Myanmar's relations with Western countries have started to improve after the 2010 elections. State leaders from the United States, the United Kingdom and the European Union have met with Myanmar's president, Thein Sein, and relaxed or ended their economic sanctions against the country to encourage its transition into a democracy.

Members of the Association of Southeast Asian Nations expressed their support by giving Myanmar the chair of that body in 2014.

Analysts wonder whether the embrace of Western democracies means China has less attraction for the people of Myanmar.

The government has said its diplomacy remains unchanged toward its neighbors. It still describes its relations with China as "pauk phaw," or brotherly, but among the ordinary people, that sense of brotherhood fell apart a long time ago and no one would use that expression for China now, said Fan Hongwei, a Myanmar expert at China's Xiamen University.