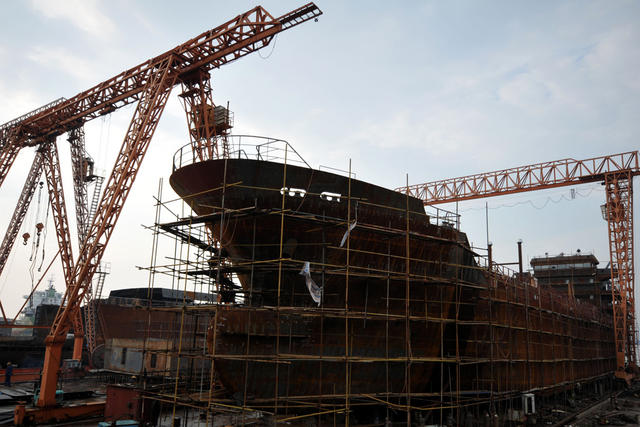 (Nantong) – China's shipbuilding companies have seen an increase in orders this year, a development that would seem to be mean prosperity for the industry.

"The shipyard is extremely busy now," said an employee of Jiangsu Hantong Ship Heavy Industry Co. Ltd. "We will launch seven new ships before the end of the year, so we're working overtime on the weekends."

Haitong Securities recently published a report saying that the industry's recovery will continue, estimating that ship prices will rebound in late 2014 once cargo capacity surpluses are resolved. Other industry observers, however, are less certain.

Sources from companies in Nantong, in the eastern province of Jiangsu, said that more orders have not made shipbuilders feel more secure because profits have been sacrificed.

Data from the Chinese Association of the National Shipbuilding Industry (CANSI) show that the industry received orders totaling 47.4 million tons of cargo capacity from January to August, year-on-year growth of 35.8 percent. Profits of the 87 major domestic shipbuilders over the same period stand at only 3.38 billion yuan, a drop of 13.6 percent.

Companies generally make annual profits of around 5 percent, several industry sources said, but increasing costs of labor and equipment have them struggling to break even.

Sainty Marine Co. Ltd., in Yizheng, also in Jiangsu, has been vexed by new orders. The company ranked third in the nation in new orders in March and July, but it had profits in the first half of the year of only 41.92 million yuan, a year-on-year decline of 42.4 percent.

"It's still a buyer's market," said Ji Fenghua, chairman of Nantong Mingde Heavy Industry Group, a shipbuilder in Jiangsu. "Many respectable shipbuilders are cutting prices to bring in orders."

Shipbuilders who sign orders to deliver vessels on a tight schedule are pressed to their limits, but they can consider themselves lucky compared to competitors who have not gotten orders.

"There have been more and more mid-sized shipbuilders like Dongxin stopping work or going out of business since last year," said one Nantong shipbuilding industry employee.

In 2012, shutdowns were mainly happening to small companies in Jiangsu and its neighbor to the south, Zhejiang, but since last year, several medium-sized companies have begun to fold, the employee said.

"Although the direct causes for their closure are different, the root cause is a break in cash flows," said an analyst from China Merchants Securities. "When this happens, it doesn't matter how many orders you have. If during the manufacturing process you start losing money because of your orders, you'll accelerate your cash outflow, which will result in bankruptcy and closure of your shipyard."

Xia Chunhui, a researcher at the Shanghai Shipping Exchange, an information provider, agreed that "having orders doesn't mean you can sit back and relax" because many of the large companies that closed this year did not lack orders.

"Some companies are taking orders at minimal profits, zero profits, and sometimes even at losses to maintain operations and employee stability," said one owner of a private shipbuilding company.

Companies ran into problems when they could not finish the vessels on schedule according to the contract, the owner said.

Shipbuilders needed to calculate their costs, such as for labor and material, said Ye Sihai, senior engineer from Shanghai Shipbuilding Technology Research Institute.

When firms could not complete vessels in time, they would face the withdrawal of the down payment and compensation requests from the ordering companies, Ye said.

"Actually you can see a lot of problems that forced recent shipbuilding companies with new orders to close," said Ye. "What you have to do is to keep a balance."

Companies are debating whether to take new orders or not, and industry analysts also wonder whether the orders are coming from real demand.

Ji said the rebound in orders is driven by two factors: speculative purchase as prices bottomed and the market's return to normal.

For example, last year the price for a 64,000 ton bulk freighter dropped below US$ 24 million before climbing back up to US$ 28 million at the end of the year, he said, adding that ship owners need new vessels to add to their operations.

Another reason ship owners are placing new orders is that the lower priced 64,000 ton bulk freighter has new technologies that will not only help owners cut shipping costs but carry more goods.

Nearly 200 such ships have been built in China since March 2013, accounting for over half of the new orders, Ji said.

Lu Jiandong, vice president of Zhejiang Zhenghe Shipbuilding Co. Ltd., said the market has yet to truly rebound, but there was evidence of speculative behavior.

When the price for the 64,000 ton freighter was US$ 24 million, many orders came, Lu said, but when the price rose by US$ 4 million, few orders were placed. The price now stands at US$ 25 million.

"If the market has truly rebounded, there will be a sustained increase in both orders and prices," Lu said.

A rebound is closely related to ship rental prices and shipping prices, said Xia, of the Shanghai Shipping Exchange.

The Baltic Dry Index (BDI), a measure of the price of shipping raw materials, has hovered around a low figure of 1,000 since the beginning of the year. The Shanghai Containerized Freight Index, an indicator of the shipping prices, also recently hit a new low for the year.

Therefore, Xia said it may be too early to start talking about a rebound in the shipbuilding industry with container shipping business still bearish around the globe.