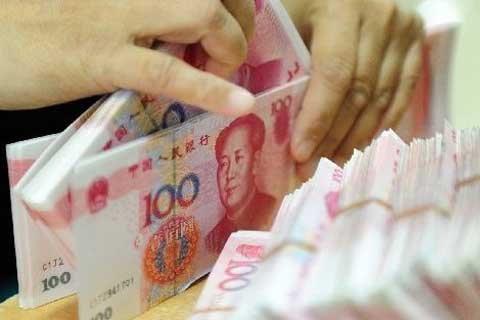 (Beijing) – Recent interest rate cuts by the People's Bank of China and other monetary policy adjustments aimed at softening the impact of a slowing economy triggered capital flight to the country's stock and bond markets.

But so far these adjustments have failed to ease borrowing costs for financially strained small- and medium-sized businesses, according to economists, demonstrating that policy tweaking alone may not be enough to invigorate the economy.

Thus, the plight of smaller entrepreneurs – whose businesses employ a large percentage of the labor force and contribute substantially to the nation's gross domestic product – has prompted calls from some economists for business tax cuts. Adjusting the business tax regime, they argue, could help stabilize GDP growth – and perhaps even accelerate growth – by giving small businesses a break.

So far, the advocates of tax reform haven't gotten far with their proposals, mainly because governments at various levels are concerned about meeting their own financial obligations and keeping the economy growing.

For example, officials note the economic slowdown has pushed fiscal deficits higher. Rising pressure on government budgets could leave little room in the near term for more than slight changes in the tax regime. The slowdown may even force governments to raise taxes and seek new revenue sources to offset the impact of the slowing economy.

Revenue growth for all governments has noticeably cooled since early 2014, even as public agencies nationwide have been under mounting pressure to spend more on education, health care and public pension systems.

Central government revenues grew 6.6 percent year on year in the first three quarters of 2014, missing a widely expected increase of 7 percent. Some regional governments did much worse: the northeastern province of Liaoning posted a 5.8 percent decline in fiscal revenues.

Among those calling for tax breaks to offset this softening is Niu Li, a macroeconomics specialist at the State Information Center, a unit of the National Development and Reform Commission. In her opinion, during any economic slowdown governments should use tax breaks as a tool to help struggling businesses get back on their feet.

However, Niu said, for now it's hard to find even the slightest support in government circles for large-scale tax cuts. That's because struggling regional governments need money and can't afford to see revenue sources whither.

"A core consideration coming out of the third plenum of the 18th Central Committee in November in 2013 was to maintain the overall level of tax rates as they are, rather than call for large-scale tax reduction," she said.

The door may not be completely closed to tax adjustments, however, said Yang Zhiyong, a professor of finance at the Chinese Academy of Social Sciences' National Academy of Economic Strategy. Tax stability could be achieved, he said, by adding new taxation targets to offset cuts.

The government's "structural tax deduction" initiative of 2008 has mandated that tax rate cuts in one area are offset by increases in other areas. The initiative was aimed at reducing what had been traditionally high tax burdens on small private businesses. And it led to a reform between 2011 and 2015 that's gradually expanded a value-added tax (VAT). The VAT has been replacing a business tax that small business owners called regressive.

By the end of 2015, according to the Ministry of Finance, the switch to a VAT is expected to save businesses a total 900 billion yuan. Some tax-reform advocates say there's room to help small business owners by streamlining the VAT regime, although the government would then have to look elsewhere for revenues to offset slowing economy's impact on budgets.

The central government could expand the scope of the sales tax, which is already slated for reform. Taxes could be raised on luxury goods or products that require a lot of energy to make and come from industries that are heavy polluters. Meanwhile, taxes on everyday consumer products could be significantly lowered or even scrapped.

For the second time in a month, the Ministry of Finance on December 12 raised taxes on four categories of refined oil products, including gasoline. The gas tax rose to 1.40 yuan per liter from 1.12 yuan. Meanwhile, the ministry canceled the sales tax on four other categories of goods, including tires and alcohol.

Another option would expand what is now a pilot property tax program nationwide. Regional governments would be the likely beneficiaries of such a change.

Shanghai and the southwestern city of Chongqing launched pilot real estate tax programs in January 2011, and other cities joined in 2013. Under Shanghai's scheme, a buyer of a new home in the city is taxed unless he or she is a registered Shanghai resident. But a resident must pay taxes on a second home.

The finance ministry is also mulling new ways to levy taxes on businesses that profit from natural resources, such as those that rely on waterways, the seashore and grasslands. In the same vein, the ministry recently started taxing coal mine companies.

Discussions about possible reductions in the personal income tax have captured public attention as well. The central government in 2011 raised the tax floor for a taxpayer's income to 3,500 yuan a month from 2,000 yuan in order to help low-income households.

Despite this reform step, however, the government said total income tax revenues grew 12 percent year on year in the first three quarters of 2014 to more than 569 billion yuan. This increase, reform advocates argue, suggests personal income tax rates could be cut even more.

Yang said income taxes could be cut across the board.

But Liu Shangxi, director of the finance ministry's Research Institute for Fiscal Science, said fiscal policies are shifting in ways that complement structural adjustments rather than absolute growth. This shifting is leaving less room for tax reductions, but means fiscal revenues will have to be used more effectively.