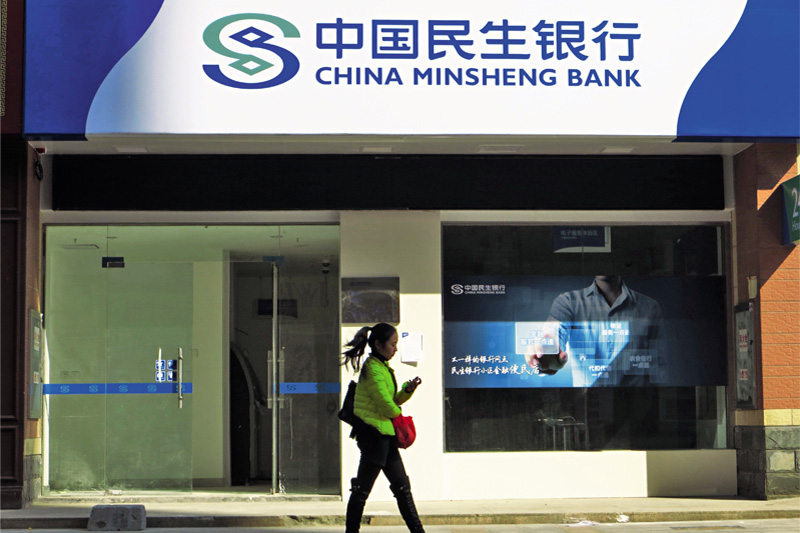 The money for the purchases came primarily from the sales of Anbang's and its subsidiaries' insurance products, open materials for the transactions show.

The purchases, which Caixin estimates involved 40 billion yuan, are the latest in a string the insurance firm has made over the past few months to diversify and strengthen its operations in and beyond the financial industry.

Anbang is a relatively small player in the insurance sector and has a history of just over 10 years, but its aggressive investments in banking and real estate have raised some eyebrows.

A few of the investments have caught attention at home and abroad, including its October acquisition of the Waldorf Astoria, a luxury hotel in New York.

Anbang was Minsheng's sixth-largest shareholder as of November. On December 1, the bank said Anbang had raised its holdings in the bank to 1.7 billion shares, or 5 percent of the total. That transaction cost the firm more than 5.8 billion yuan, based on Minsheng's closing price of 7.33 yuan per share on the previous trading day. It made Anbang the second largest shareholder of Minsheng.

New Hope Investment Co. Ltd and Sichuan Nanfang New Hope Industry Co. Ltd., both subsidiaries of animal feed producer New Hope Group, hold a combined 6.6 percent of the bank and are viewed together as its second-largest shareholder. The holdings of all other major investors are less than 5 percent.

Yao Dafeng, a vice president of Anbang, joined Minsheng's 18-member board of directors on December 23.

Anbang has also beefed up its holding in China Merchants Bank. The lender announced on December 9 that Anbang's property insurance subsidiary had purchased more of its shares and now holds 10 percent of the bank.

Also in December, Anbang signed a deal with Dutch insurer Delta Lloyd NV to buy its Belgian banking operations for US$ 273 million.