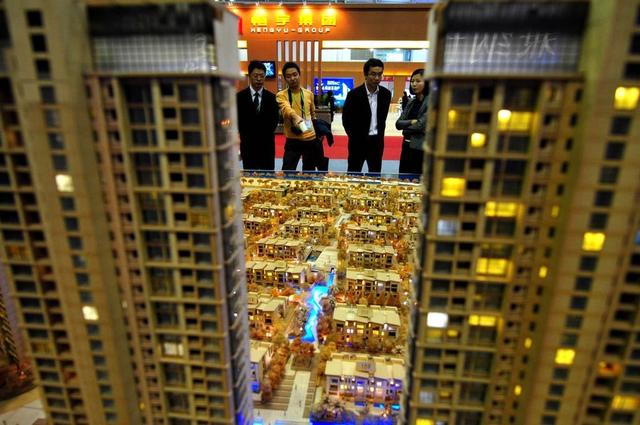 Last year, many cities relaxed or lifted the purchase restrictions they put in place after the central government urged them in 2010 to cool the real estate industry. This worked, and Yu Liang, president of China Vanke Co. Ltd., the country's largest property developer by number of units sold, says developers have started facing great difficulties in selling homes in a changing market.

In the past, salesmen could afford to wait for buyers in their offices after publishing ads in traditional media, such as newspaper, Yu said, but over the past year they had be more creative in searching out buyers.

Real estate agencies and ad websites that have also run into problems with sales have also made changes to their operations to adapt to a new market, setting up new websites and developing their own teams of agents.

Over the past year, everyone in the industry was testing out new ways to do business, Chen said, and most experiments involved the Internet.

Vanke's branches in the major cities of Chengdu, Xi'an and Shanghai started letting people register as salesmen on its website starting in July, allowing them to earn commissions from buyers they introduced to the company.

On August 25, Vanke started cooperating with Taobao.com to sell homes in 23 developments in 12 cities over one month. Half of the projects were in Hangzhou, in the eastern province of Zhejiang. The promotion gave people discounts on homes based on Taobao spending records. Vanke sold homes worth of 1.3 billion yuan through the promotion, Yu said.

Another developer, Sino-Ocean Land Holdings Ltd., used what it called a crowdfunding program to sell homes. The company cooperated with e-retailer JD.com to sell 11 homes on a November 11 promotion.

The promotion saw people buy tickets in a lottery for a chance to buy a home at an 89 percent discount. Players who did not win get back their money in 30 days and Sino-Ocean sold all the homes.

Later, Sino-Ocean launched another promotion on JD.com that had people pay 11 yuan and one lucky person would win all the money to use as a down payment for a home in one of nine cities. However, the promotion failed to raise enough money for a single down payment, and JD.com had to return the money.

Whether or not the promotions worked, Sino-Ocean seems to have been benefited. It sold homes worth 4.54 billion yuan in November, about 80 percent more than in the same month a year earlier.

Vanke is also cooperating with real the estate information website pinganfang.com to launch a promotion to sell 216 homes in the southern city of Guangzhou. When participants paid a total of 15 million yuan into a special fund, they could get 13 percent discounts on a home purchase. That promotion continues.

A new website Fangdd.com got the attention of developers and real estate agencies in 2014 because it figured out a way to act as a middleman between them. Fangdd.com negotiated with developers on certain properties that small agencies could then sell. In the past, developers only worked with large agencies to get their homes sold.

The website got some heavyweight help when it convinced Xiao Li, former vice president of Vanke, to start working for it in November. Xiao's participation showed that the industry was starting to pay attention to the importance of service companies, said Zeng Xi, the chief operating officer of Fangdd.com.

Analysts said the website could have success amid the industry downturn because it combined a traditional way of selling homes through agencies with the efficiency of the Internet.

The country's largest real estate information website, the separate Fang.com, had a difficult relationship with agencies in 2014. Many boycotted it because of the high charges it collected for their ads, and some stopped using its services altogether.

The spurred Fang.com to transform itself from an ad website into a trading platform handling the entire process a buyer needs to complete to purchase a home. For this, it built up its own team of agents.

Homelink Real Estate Co. stopped placing ads on Fang.com in November. The agency said the website contributed a little to its business. Instead, Homelink set up its own website and mobile application. Another large agency, BA Consulting & 5I5J Group, has done the same.