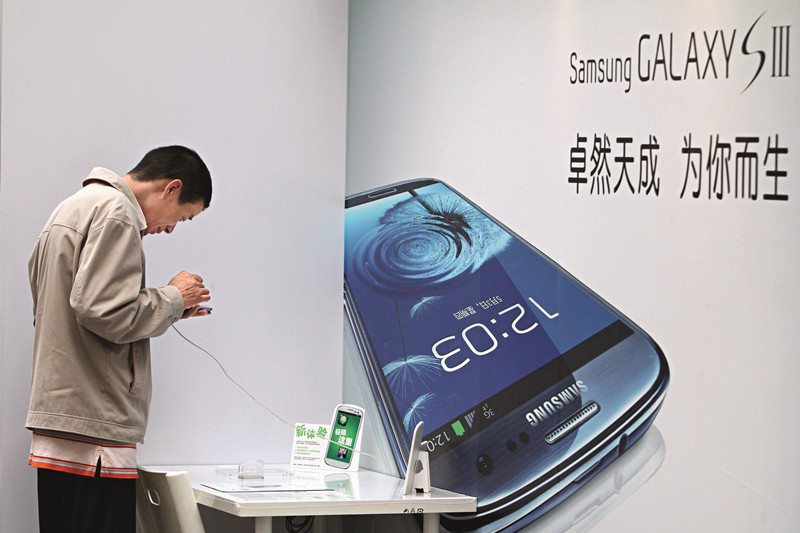 (Beijing) – Global smartphone leader Samsung Electronics Co. Ltd. had a harder time selling its gadgets in China in 2014 than in previous years, thanks to continued competition from Apple Inc. and up-and-coming Chinese rivals such as Xiaomi Inc.

Samsung's market share fell by almost one-third in China last year. The country is the South Korean giant's second-largest market after the United States, largely contributing to expectations it will see its first decline in profits since 2011.

Data from CCID Consulting Co. Ltd. showed that Samsung's market share in China fell from 20 percent in January, to 13.7 percent in October. It remained No. 1 in China market share, but snapping at its heels are Lenovo Group (10.7 percent), Apple (9.4 percent), Huawei Technologies Co. (8.5 percent) and Coolpad Group Ltd. (7.7 percent).

Samsung's sales decline continued in November, one of its dealers said. "Dealers sold 1.6 million Samsung phones in October, but in November the number was only 1.2 million," he said.

Some 356.2 million smartphones were sold in January, but the figure fell to 307 million in October, CCID Consulting data show. The sales of smartphones costing more than 4,000 yuan remained at around 2 million a month.

Samsung continues to battle Apple in the high-end market and now faces Chinese firms in the low-end market, said Zhao Yang, who directs a research center at CCID Consulting.

Samsung's Galaxy and Note smartphones have long been popular with consumers who like a larger screen, but in September Apple introduced the iPhone 6. Versions of that device boast screen sizes of 4.7 inches and 5.5 inches, bigger than the 4 inch screen on the iPhone 5S.

An industry analyst who declined to be named says one complaint users have about Samsung's smartphones is its Android operating, which some say isn't stable. One consumer in Beijing said the operating system was the major reason he and his friends refused to buy Samsung devices. Chinese consumers also complain the Android system gets slow when a smartphone has many applications on it, and that Samsung's devices overheat and the batteries suddenly run out of power.

Meanwhile, Chinese smartphone makers grabbed market share from Samsung by improving the design and quality of their products, the industry analyst said. Many devices sell for less than 1,000 yuan. For 1,500 yuan a consumer could get a Xiaomi model called the Mi 3 that has similar specifications as the Samsung Galaxy S5, which costs about 3,000 yuan.

Chinese smartphone makers, such as Xiaomi, were also trying to improve the Android operating system and provide more apps so users had a better experience, improvements Samsung was not making, the analyst said.

Samsung usually set the prices of its phone high, then brings them down, one of its dealers said. He mentioned the Galaxy Note 3, whose price was slashed by 500 yuan within a week of it launch, something that would annoy people who bought the device early.

Chinese smartphone makers took a different approach. They start out with low prices, and months later unveil upgraded versions of the phones for the same price, a strategy that seems to agree with Chinese consumers.

Samsung had taken note of its new Chinese competitors, a source close to the South Korean company said. Apple was still a major competitor, but Samsung saw Xiaomi as its biggest rival, and is also closely watching Huawei and Lenovo Group Ltd.

Samsung might return to a strategy of selling low-end smartphones in China – an approach it abandoned in 2012 – if its sales numbers continue to flag, a source from one of its dealerships said. Consumers might find its devices more appealing if they were priced only a few hundred yuan more than smartphones made in China.

However, that would hurt Samsung's brand, another dealer said, a change could also affect its chip and screen businesses. Though the company's sales fell in 2014, consumers still saw its smartphones as the iPhone's equal, he said.

There are signs Samsung is trying to reverse its decline in China. In December, it started working with dealers in the country's 31 provinces, regions and municipalities, and those dealers then acted as middlemen distributing the devices.

In the past, Samsung had worked with dealers that did business nationwide. The new model will help Samsung be more responsive to the market, Zhao said. He added that Samsung should streamline its operations to cut marketing costs, and take steps to improve Android and offer more apps.