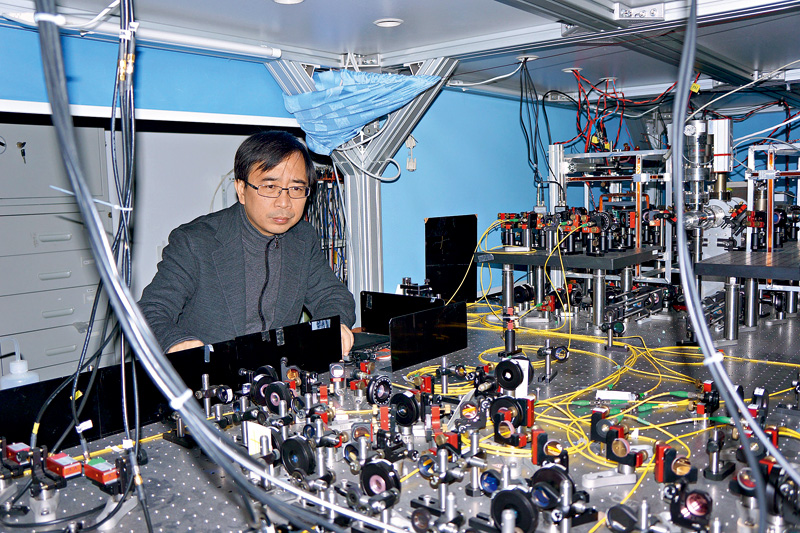 (Beijing) -- This may be a quantum leap year for an initiative that accelerates data transfers close to the speed of light with no hacking threats through so-called quantum communications technology.

Within months, China plans to open the world's longest quantum communications network, a 2,000 kilometer electronic highway linking government offices in the cities of Beijing and Shanghai.

Meanwhile, the country's space scientists are preparing a communications satellite for a 2016 launch that would be a first step toward building a quantum communications network in the sky. It's hoped this and other satellites can be used to overcome technical hurdles, such as distance restrictions, facing land-based systems.

At a recent conference on quantum science in Shanghai, Wang said scientists from CAS and other institutions have completed major research and development tasks for launching the satellite equipped with quantum communications gear.

The satellite program's basis for success was confirmed by China's leading quantum communications scientist, Pan Jianwei, a CAS academic who is also a professor of quantum physics at the University of Science and Technology of China (USTC) in Hefei, in the eastern province of Anhui. Pan said researchers reported significant progress on systems development after conducting experiments at a test center in Qinghai Province, in the northwest

The satellite would be used to transmit encoded data through a method called quantum key distribution (QKD), which relies on cryptographic keys transmitted via light-pulse signals. QKD is said to be nearly impossible to hack, since any attempted eavesdropping would change the quantum states and thus could be quickly detected by data flow monitors.

A satellite-based quantum communications system could be used to build a secure information bridge between the nation's capital and Urumqi, a city that's the capital of the restive Xinjiang Uyghur Autonomous Region in the west, Pan said.

It's likely the technology initially will be used to transmit sensitive diplomatic, government policy and military information. Future applications could include secure transmissions of personal and financial data.

Plans call for China to put additional satellites into orbit after next year's groundbreaking launch, Pan said, without divulging how many satellites might be deployed or when. He did say that China hopes to complete a QKD system linking Asia and Europe by 2020, and have a worldwide quantum communications network in place by 2030.

In 2009, China became the first country in the world to put quantum communications technology to work outside of a laboratory.

In October of that year, a team of scientists led by Pan built a secure network for exchanging information among government officials during a military parade in Beijing celebrating the 60th anniversary of the People's Republic. The demonstration underscored the research project's key military application.

The country is also working to configure the new technology for civilian use.

A pilot quantum communications network that took 18 months to build was completed in February 2012 in Hefei. The network, which cost the city's government 60 million yuan, was designed by Pan's team to link 40 telephones and 16 video cameras installed at city government agencies, military units, financial institutions and health care offices.

A similar, civilian-focused network built by Pan's team in Jinan, the provincial capital of the eastern province of Shandong, started operating in March 2014. It connects some 90 users, most of whom tap the network for general business and information.

In late 2012, Pan's team installed a quantum communications network that was used to securely connect the Beijing venue hosting a week-long meeting of the 18th National Congress of the Communist Party, with hotel rooms where delegates stayed, as well as the Zhongnanhai compound in Beijing where the nation's top leaders live and work.

Next on the development agenda is opening the network linking Beijing and Shanghai. Pan is leading that project as well.

If all goes as planned, Pan said, existing networks in Hefei and Jinan eventually would be tied to the Beijing-Shanghai channel to provide secure communications connecting government and financial agencies in each of the four regions. The new network could be operating as early as 2016.

No Room for Hype

A quantum code expert said that so far quantum communications technology development efforts in China have basically focused on protecting national security. "How important it will be for the public and in everyday life are questions that remain unanswered," said the expert.

To date, Pan said, technical barriers and the high costs of systems development have kept private capital out of what's now almost exclusively a government initiative. Moreover, it's still too early to tell whether the technology has any potential commercial value.

Pan has warned the public not to listen to investment come-ons that hype the moneymaking potential of quantum communications businesses. At this stage of the game, he said, the focus is still on technological development, not commercial applications.

Nevertheless, since 2009 USTC has been building a commercial enterprise called Anhui Quantum Communication Technology Co. to produce equipment based on technology developed by Pan and his team. The company is China's largest quantum communications equipment supplier. Last September, it said it had started mass-producing quantum cryptography equipment.

Once the technology has matured, said Wang Xiangbin, a physicist at Beijing's Tsinghua University, its range of applications should be targeted to specific industries and regions because its high barrier in technology and costs. Quantum communications is not a technology suitable for mass use via the Internet, for example, Wang told a group of scientists at a 2012 seminar.

Some experts say it's wrong to assume that quantum communications is a flawlessly secure means of transmitting information. Another Tsinghua physics professor, Long Guilu, said quantum communication is only theoretically safe, since malfunctioning equipment or operational errors can open doors to risk.

Experimental systems built in 2007 by Chinese and U.S. physicists reportedly achieved secure QKD transmissions between two points more than 100 kilometers apart. But the experiment also taught scientists that data can be intercepted by a third party during a transmission.

To test the capacity and safety of the network linking Beijing and Shanghai, Pan said his team plans to ask other communications experts to carefully study the system and look for potential security holes. The network could then be modified in ways that close any detected gaps and reduce hacking risks.

"Assessments and testing will be conducted after the network is completed," said Pan, who remains convinced that any network using quantum cryptographic technology is more secure than any other communications channel.

Pan worked with Zeilinger about a decade after U.S. physicist Charles Bennett and colleagues at IBM Research built the world's first, functioning quantum cryptographic system. Based on their research, the first network was installed in the U.S. city of Boston.

Like their counterparts in China, researchers in the United States, Japan and European countries continue work to advance the technology. A key effort is aimed at extending that potential reach of quantum communications systems, which for years were used only to span short distances.

Some experts have even wondered whether the new technology has been misidentified, since its key feature is high-level cryptography, not electronic communications.

"What we can do now is merely encrypt data, which is far from real quantum communications," said one expert who declined to be named. "Theoretically it can't be hacked, but in practice it has many limitations."

"It's not accurate to call it quantum communications," said Guo.

Whatever it's called, China appears determined to push ahead with the research and development that paves the way for a new era of secure communications. And according to Pan, that era is still at least a decade away.

"It will take 10 to 20 years to really put (the technology) into practice," said Pan.