China Must Press On With Fight against Corruption 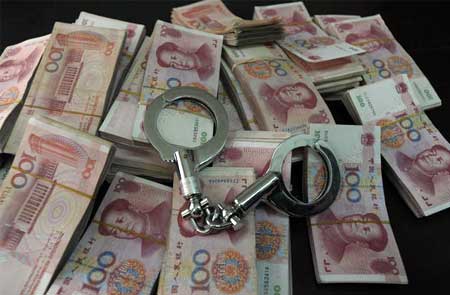 Unsurprisingly, the anti-corruption crackdown was a major item on the agenda of this year's legislative meetings. In his report on the government's work, Premier Li Keqiang spoke of the "harrowing" extent of the problem and warned government officials against any abuse of power.

Yu Zhengsheng, chairman of the Chinese People's Political Consultative Conference, told the annual gathering that the government has revoked the membership in the top political advisory body of 14 disgraced officials, including Ling Jihua and Su Rong, and pledged that the leadership would continue to wage war on graft to clean up the Communist Party and government.

Many proposals to combat the problem have also emerged from delegates. The anti-corruption fight is well and truly under way.

The downfall of Zhou Yongkang, Xu Caihou and Ling made 2014 a milestone year in China's corruption purge. With no sign of a slowdown, the authorities have this year turned their attention to the "tigers" in the military. A total of 30 senior officers have been placed under investigation, the Central Military Commission said in two lists announced on February 15 and March 2.

Such concerted efforts show the party is in for the long haul. This will be no short-lived campaign. As such, the party must maintain its zero tolerance for corruption, reducing it where it exists and preventing its emergence where oversight is weak.

After all, the party is fighting to win over public opinion and for its own survival.

When it comes to graft, the country's twin focus on enforcement and prevention is necessary. Though many dirty officials have been caught in the past two years, the nation is far from rooting out the scourge. For every dirty official caught, another takes his place.

Nevertheless, it's important to keep the pressure on, not just as a way to warn off potential criminals, but also to buy time for anti-corruption officers to reform and improve the governance system, so that officials either have no reason to turn to graft or they won't dare to. And those who do flout the rules must be made to face the law.

Taking a zero-tolerance attitude towards the scourge will not mean its complete eradication, of course. How a society deals with corruption reflects the development of its civilization, and graft itself is a byproduct of social progress. Thus, while we must be clear-eyed about the scale of the problem, there is no need to be overly pessimistic.

Zero tolerance means the regulator must do its best to expose wrongdoing and punish all those found to be guilty, with no exception. Otherwise, it will be fighting a losing battle.

If enforcement is difficult work, prevention will be even harder. This requires not only the authorities' resolve to crack down on malfeasance, but also the establishment of an accountability system that ensures effective oversight of those in power. This is the foundation of a root cure of the rot.

A cure involves systemic change. Apart from the eight rules on official behavior aimed at cutting extravagance and waste, as well as efforts to overhaul officials' salaries and compensation, the crackdown on graft itself may guide the government on changes needed.

For example, numerous modifications to the party discipline apparatus have been made over the past two years, thanks to the problems unveiled by the commission's relentless crackdown.

A larger framework of governance that encourages official propriety will in the end require comprehensive reform of the political and economic systems. This means putting limits on power; reducing opportunities for rent-seeking; streamlining and redrawing the scope of administrative functions; and allowing the market to play a key role in resource allocation.

For two years, the anti-corruption crackdown has been shadowed by all kinds of doubts and speculation. These must be debunked.

There are those who say the campaign is damaging the reputation and image of the government, thus benefitting the anti-government forces. Such talk has no credibility and must be refuted.

Yet others have claimed that the crackdown will add to pressures on the economy, which is already suffering a slowdown amid a wrenching restructuring. This also flies in the face of facts. Our slowing economy stems from both cyclical and structural causes that have little to do with the crackdown. In fact, one could argue that, by muddling the relationship between the government and private sector, corruption is a cause of our economic problems.

The corruption crackdown will – and must – continue. Corrupt officials who hope to be spared should stop harboring such fantasies.