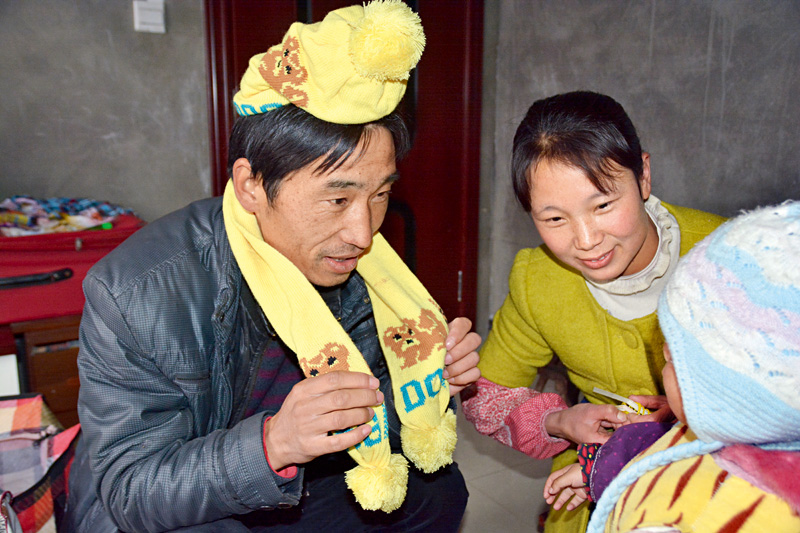 (Shangluo, Shaanxi Province) – On her first visit to the home of 3-year-old Wang Guohao, family planning agency worker Tang Hailan brought along a big bag of books and toys.

Neither the boy's mother nor grandmother was amused. Fearing a fine from the agency – or worse – they gave Tang the cold shoulder.

"I know nothing," the grandmother told Tang. "Go ask his mother."

"What if I refuse?" the mother said after Tang asked for her cooperation.

But little Guohao's relatives had misunderstood Tang's intentions. And they didn't know that her responsibilities as an enforcer for family planning authorities in Danfeng County, in Shaanxi Province's city of Shangluo, have dramatically changed.

Tang is no longer hunting down families that may have violated the country's tough rules on child bearing. Now, she works as a child development specialist under a new pilot program launched by the National Health and Family Planning Commission, Shaanxi Normal University and Stanford University.

It's a program also backed by the Danfeng County family planning commission that, if successful, could be used as a model for future programs to help hundreds of thousands of family planning workers nationwide transition to new jobs that have nothing to do with forced abortions or fining family planning rule violators.

Danfeng is one of seven counties under Shangluo's jurisdiction that have been designated as officially impoverished by the central government. The county's average annual disposable income is 6,223 yuan per person, and half its population, or 560,000, have migrated to larger cities for work.

Traditionally, family planning agency workers including Tang spend their workdays enforcing the country's one-child policy. But following a government decision in 2014 to relax the controversial rules and let more couples, either of whom is the family's only child, have more than one baby, the workloads for many family planning staffers have shrunk or even dried up.

Guobao's mother and grandmother cold-shouldered Tang because they assumed she had been sent to their home to enforce rules. In fact, Tang wanted to help the family with practical training to help them raise the boy as part of a pilot program.

The program launched in November began with Tang and 68 other family planning workers. They were assigned to check on the families of 227 randomly selected children under three years old, and to determine why children in rural areas lag in educational and social skills development.

Each worker visits pre-selected families with children weekly for an hour of basic skills training. A child may be taught to count or sing, or a session may focus on playing with toys. Each child's progress is monitored.

Scott Rozelle, a Stanford University professor of international studies who is working with the program, said grandparents stand to benefit by learning how to properly care for their little grandchildren. A lack of child-care knowledge among the older generation – a generation in rural China that's often responsible for raising children after parents move to cities for employment – has put many children at a disadvantage.

Rozelle said he's met many grandmothers in China who ask: "Why should I talk to and play with a baby? They're so little!"

But in the professor's view "it's not right to just wrap babies up and leave them in bed alone without talking to them and playing with them."

In a Shangluo village called Heihegou, grandmother Wang Chunling said that before joining the program she thought she was providing the best care for granddaughter Li Mengyue, who is 2½. She fed the girl well, Wang said, and kept her warm.

Wang said she sometimes brought Mengyue along when going out to tend the family's cherry orchard. At other times, she left the toddler alone at home in front of a TV. She was never given a book, Wang said, "because we thought she was too young to read."

The program's researchers said one-third of the infants and toddlers in Heihegou are lagging behind national averages for children of their ages in terms of physical ability, and 21 percent are behind in cognitive ability.

A recent Shaanxi Normal University study found that only 8 percent of all rural children in China later attend college, compared with 70 percent of urban children. The study also found that some 30 percent of rural students dropped out of middle school.

Luo Renfu, an associate professor at the Chinese Academy of Sciences' Center for Chinese Agricultural Policy, is in charge of curriculum development for the program. He said researchers have for the past decade looked into what might be behind the educational challenges facing rural children. They've examined possible shortcomings in primary school education and child nutrition.

Last year, he said, researchers determined there was a need to support families via training that promotes early childhood development. They also wanted to help rural parents and grandparents change how they view education for young children.

The program's supporters also see the initiative's economic value. Cai Jianhua, who heads the Training and Communication Center at the health commission, sees today's youngsters as tomorrow's torch bearers for the country's economic development. So it's important, he said, to make sure children are educated in ways that prepare them for future challenges.

Cai said the next generation must be well-educated to help China cope with changing demographics as interest in child-rearing among couples tapers off, and the nation's population of elderly people rises.

"If China wants to have a mode of development that will be driven by creativity, we must rely not only on children in urban areas," Cai said. "Neither can we afford to waste a single child."

To get the project off the ground, the health commission contributed 100,000 yuan along with Shaanxi Normal University and the CAS's agricultural policy center and arranged for trainers to be selected from employees from the Shaanxi and Shangluo branches. The commission's involvement reflects its interest in creating new positions as family planning agencies tone down policy enforcement.

The commission eventually wants its local offices around the country to focus on providing services and working more closely with health care facilities.

Based on the number of young children in China, and assuming the current pilot project succeeds, Cai estimates the market could support 8 million early childhood training specialists. The government recorded 16.87 million births nationwide in 2014, which means the population of children under age three could be more than 50 million.

Such an industry could come just in time for family planning employees whose jobs could be jeopardized when their offices will be overhauled by the end of August. Many employees fear they'll be marginalized or made redundant.

One supporter of new roles for family planning workers is Qin Yulu, who has worked at a township agency for nearly 20 years. His office is scheduled to merge this year with a local hospital, and it's unclear what job if any he'll have afterward.

Qin said a program focusing on early childhood development would "serve the national interests as well as each individual family."