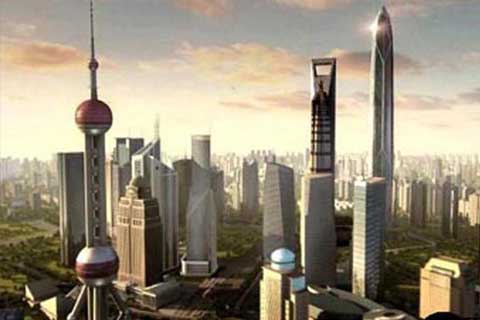 (Guangzhou) – It may be difficult to keep track of what Chinese city is home to the country's tallest building over the next few years as local governments race to claim the crown in what seems to be an obsessive pursuit of skyscrapers.

The Shanghai Tower is the current record holder, coming in at 623 meters tall. However, the cities of Suzhou, Qingdao and Wuhan have planned to construct buildings ranging from 633 to 729 meters tall.

The southern city of Shenzhen was also in the skyscraper race as well, until Ping An Insurance Group, which had planned to build a 660 meter tall headquarters, recently said it had to reduce the height of the building to 600 meters because it is too close to an airport.

China has erected a total of 352 buildings that are at least 200 meters tall, the council's data show. This is twice the number for the United States, four times that of the United Arab Emirates (UAE) and nearly 10 times that of Japan.

Most of the skyscrapers were built during the past two decades, the data show. From 2009 to 2012, an average of 22 buildings were completed every year. The number soared to 37 in 2013 and 58 last year.

Experts say the trend may well continue. CBRE Group, a real estate services provider, said in a research report that 60 percent of all new buildings taller than 150 meters finished from 2014 to 2018 will be in China.

Five Chinese cities will be atop the list of regions with the most such buildings under construction. They are Shenzhen (18), Shenyang (10), Chongqing (9), Tianjin (8) and Nanning (7).

Local governments regard skyscrapers as important because officials think they can improve a city's look and make it more commercially competitive by attracting companies and financial institutions to open offices in the structures, said Chen Zhongwei, head of research at CBRE's arm in China.

However, CBRE warned that many cities are too small to create enough demand for the office buildings they are developing.

Chen said he is optimistic about demand for tall office buildings in China's largest cities because they have more robust service sectors and limited supplies of land.

The vacancy ratio for most office buildings in Shenzhen is an acceptable 7 to 8 percent, he said, and the figures for some buildings are even lower. Rent levels in those buildings have steadily increased over the past few years.

The same cannot be said of many smaller cities. CBRE's report said Tianjin, Chongqing and Shenyang, the capital of the northeastern province of Liaoning, may not yet have a strong enough service sector for companies to take up the office space they have or are about to build.

"These second-tier cities are at most a regional center and can hardly develop into a national hub, let alone a global one," the report says. "That is why they will have a hard time finding enough financial institutions" to come and fill in the space in their new office buildings.