Businessman Linked to Detained Activist May Also Be Policeman 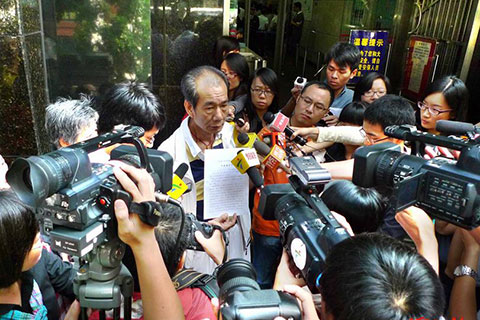 (Changsha) – Internet users have found that a businessman linked to an anti-corruption activist who was recently detained for soliciting a prostitute may also serve as a policeman, prompting speculation the activist was set up.

Ou Shaokun was detained by police on March 26 in the central city of Changsha while in the company of a woman who he claims said she had been paid by a businessman to have sex with him.

The 62-year-old Ou lives in his native Guangzhou and is best known for campaigning against officials who use government vehicles for their own purposes.

Ou has told reporters that he visited Changsha at the invitation of a woman he knew, and through her he met a businessman whose card identified him as Chen Jialuo, the general manager of Changsha Tengchuang Culture and Communication Co.

Caixin has visited Changsha's industry and commerce bureau and found that a man named Chen Jianluo – notice the small change in spelling of the given name – is indeed the head of that company.

The story of Ou's detention has attracted great attention in China. Internet users did some digging and found that a man named Chen Jianluo is director of a unit of the Changsha police.

Caixin contacted the Changsha police, but a spokesman declined to comment.

China's police officers are banned from taking other jobs.

An employee of Xiaoxiang Information Technologies said that he last saw his boss on April 2, the day Ou was released.

"General Manager Chen said that he is going on a business trip without saying where he is going and when he is coming back," the employee said. "We cannot reach him."

The employee said he has seen a photo in news reports that was taken from the website of the Changsha police force. That picture shows officer Chen Jianluo, and the employee says it looks like the man he works for.

Reporters have also shown Ou the photo and he identified the person in it as the businessman he had dinner with in the company of two women before his detention.

The employee of Xiaoxiang Information Technologies called his boss in the presence of reporters, but no one answered. The number he called matched the number listed for a "Director Chen" that appears in a police job recruitment ad that is online.

He said he met the man through one of the women at the dinner that night. Ou said that he, the businessman and the woman and a friend of hers spent a night eating, drinking and singing songs.

Ou said he returned to his room because he did not feel well, and one of the women from earlier in the evening later knocked on his door. He let her enter, and shortly after they started kissing, the police barged in and took photos, Ou said.

Ou's microblog has more than 104,000 followers who enjoy reading about the government employees he finds abusing their vehicle privileges.

Hours before he was detained he published photos of a Toyota SUV that he says is one of two that police officers in Guangzhou use for their own purposes.

He said he has evidence that both vehicles were driven to a public cemetery in the Hunan city of Shaoshan, which is known for being the hometown of Mao Zedong, modern China's founding father.