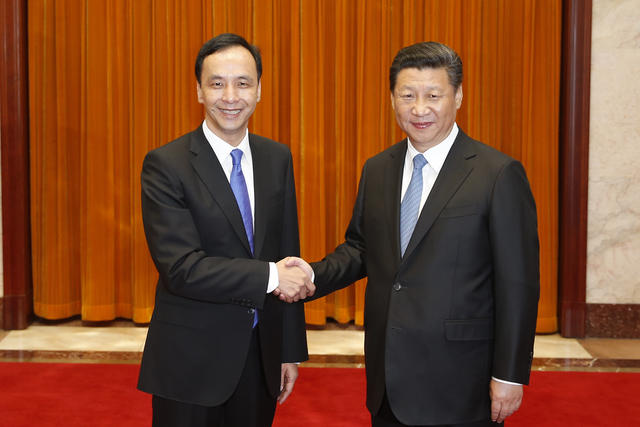 Relations across the Taiwan Strait are at a turning point. At the meeting this month between Communist Party general secretary Xi Jinping and visiting Kuomintang chairman Eric Chu, Xi proposed five guidelines for strengthening ties that clearly reflected Beijing's strategic thinking on the matter. In particular, the call for a framework to "systematize" the peaceful development of cross-strait ties is vital, as it will act as an anchor in stormy weather.

Though the outlook has been fair in recent years, a number of uncertainties lie ahead. Taiwan will hold a general election early next year, and many fear that any change in the ruling party will set back cross-strait relations. In this context, Xi's pledge that no one should be allowed to threaten the steady progress of ties was notable.

Soon after Xi spoke, the head of the State Council's Taiwan Affairs Office said the conversation for setting up a strategic framework could extend beyond the two parties to include other sectors of society, underlining the importance Beijing has placed on this effort.

History demonstrates the urgent need for such a framework. During the years when Taiwan was led by Lee Teng-hui and Chen Shui-bian, political tensions reached a high on not a few occasions. Fortunately, a groundbreaking meeting between Hu Jintao and Lien Chan in 2005 put relations on a more even keel.

The Kuomintang's recapture of government power in 2008 further ushered in several breakthroughs. Talks were restarted between the Association for Relations Across the Taiwan Strait and the Straits Exchange Foundation, facilitating the inking of 21 agreements of cooperation in areas such as trade, freight, finance, the law and medicine. Direct flights have resumed, and more mainlanders now travel to Taiwan for a holiday.

Nevertheless, seven years after rapprochement began, the low-hanging fruit have been picked. Increasingly, both sides now have to confront the difficult questions in their relationship; there's no better time to chart a new direction for the future. In this regard, Xi's overture is timely, and underlines Beijing's sincerity to build a common future of mutual benefit. All in Taiwan have good reason to welcome it.

What next then? The Economic Cooperation Framework Agreement has acted as a platform for dialogue between the two. But a framework to ensure the steady development of peaceful ties must surely involve more than trade. What other areas should be covered? What should be the basis of such an entity, and how should it fit into the existing structure of dialogue? Answering these and other questions call for bold vision and a meticulous consideration of the specifics.

Xi himself has stressed that cross-strait relations must be based on the mutual recognition of the 1992 consensus on "one China," the rejection of Taiwanese independence, and determination to further cooperation in trade and other areas for the benefit of citizens on both sides of the strait.

We believe the framework must address the following core issues.

One, there's a need to consolidate the consensus on "one China," to ensure both sides are working toward the same goal.

Two, in ways that do not contravene the "one China" principle, both sides must try to negotiate resolutions to their long-standing differences in areas such as defense, foreign affairs and ideology. This will help to build mutual trust and further the public interest.

Three, the framework should enlarge the space for cooperation in the civic and business sectors, and such engagement should not be unilaterally cut in the event of heightened tensions.

Four, there must be mutual respect for each other's social system and lifestyle, and mutual trust. In fact, both should draw lessons from each other's experience in public governance and social development.

Building a framework takes time, but we must start somewhere. The challenge is immense. As a spokesperson for the Taiwan Affairs Office conceded: "Our long years of separation and different social systems have inevitably weakened communal ties. People think differently."

Facing up to the long-standing differences in politics and international relations outlook will require laudable courage; managing them will require empathy from both.

At their meeting, Chu said respect for differences was important in seeking common goals, while Xi stressed the need to resolve these differences. Both statements were but different ways of expressing the understanding that resolution and respect must go together.

In this "Asian Century," with its ever deeper regional integration and resurgent Chinese economy, facilitating greater peace and prosperity on both sides of the Taiwan Strait is an opportunity not to be missed.