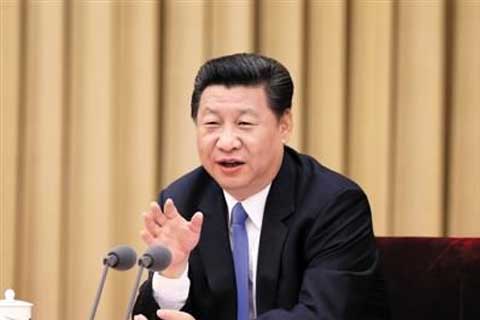 (Beijing) – The ruling Communist Party recently held a three-day conference to talk about ways to gain the support of groups of people who are not members – a move one expert says is an effort to garner support for reforms.

The Central Committee, the party's 205-member nexus of national power, held the meeting on "united front" issues from May 18 to 20 – the first time in nine years this type of conference has been held.

The party has used what it calls united front work to nurture good relations with non-party groups inside and outside the country, particularly during the Cold War, when China was more isolated.

Xi Jinping, the party's general secretary, identified three groups that the party should seek to work closer with.

"There is a need to strengthen our relationship with prominent representatives of new media via regular contact and interaction both online and offline," he was quoted by the official Xinhua News Agency as saying.

Xi said that the leaders of new media industries – a broad and changing term that refers to use of the Internet to transmit news to mobile devices – could help the party patrol cyberspace.

He identified the other two groups as people who have studied or are studying abroad and the new generation of entrepreneurs. Xi said many individuals in this latter group are not party members, but they are becoming economically and socially influential.

Xi, who took the reins of the Communist Party in late 2012, is likely to get two five-year terms as its general secretary, and some experts argue he is striving to ensure he continues to wield strong influence over the nation's affairs even after that.

Shortly after he took power from Hu Jintao, Xi launched a massive campaign against corruption, and he may be seeking ways to bolster the party's legitimacy in the eyes of the public amid a nearly daily torrent of news stories about dirty officials, generals and executives.

This could become an even larger issue as economic growth – and new job creation – slow. The number of newly created jobs fell by 200,000, or 5.81 percent, in the first quarter, compared to the same period a year earlier, recent official data show.

A complicating factor is the party's efforts to continue to transform the economy into one playing by market rules and to establish the rule of law. Plans for progress in those areas have been in place for two years, but implementation has been slow, obstructed by poor coordination and resistance from interest groups, among other problems.

Li Keqiang, the premier and party No. 2, has repeatedly complained lately that reform is going too slow.

Ye Xiaowen, vice president of Central Institute of Socialism, a research body linked to the party, said China will face many challenges in its push for deepening reforms, and the united front approach can help overcome them.

Three-quarters of the country's intellectuals are not party members, he said, and uniting this group is the main chore of united front efforts.

"To unite non-party intellectuals, the party needs to embrace them with due respect and a sense of inclusiveness in order to make full use of what they do best," Ye said.