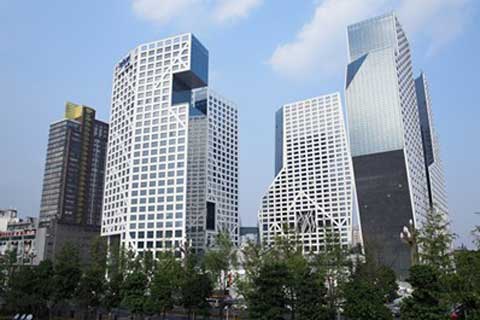 (Chengdu) – The Sichuan branch of the China Banking Regulatory Commission (CBRC) recently told banks in the southwestern province's capital, Chengdu, for data on the value of collateral put down in the commercial property sector.

Banks have submitted their reports, one employee of a local bank said, but the results have not been made public. This was the first time the CBRC's branch asked for the information on the collateral, most of it in the form of land and buildings, the person said.

If the value of the collateral is lower than 30 percent of what it was assessed at, the loan in question will be considered non-performing, the bank employee said, and one worry is that some collateral was overvalued to begin with.

The CBRC's Sichuan office has been paying close attention to risks in the commercial property sector in recent years and has also issued warnings, the bank employee said.

Chengdu is suffering from an oversupply of commercial property, especially office buildings, government data show, a problem that is exacerbated by new space hitting the market this year.

Rising vacancy rates and falling rents are putting pressure on developers and companies and individuals who have properties, and the hope of all of them is that the government intervenes to help them out.

Chengdu went on a building spree following a devastating earthquake in 2008. Because of central government limits on new residential buildings, most developers targeted commercial projects.

In 2011, the provincial government unveiled plans for the Tianfu New Area, which would be a home for manufacturing and services companies, and a large portion of it was to be in Chengdu. Officials also encouraged many companies to develop commercial projects in Tianfu, which provided 650 square kilometers of land to build on.

Banks eager for business boosted the development of commercial properties in Chengdu by lending to developers without paying too much attention to the rules, another bank employee said.

In 2013, the Sichuan branch of the CBRC published a report that said banks broke rules by lending to developers of three projects that did not meet a 30 percent funding requirement. Some banks lent money to companies without specifying what it should be used for, and the firms turned around and invested in commercial properties, the report said. Of the 54 developers that the CBRC's branch looked at, only 16 had experience developing a commercial project.

The report included some alarming statistics. The city's per capita area of commercial properties was almost two times the international average of 1.2 square meters; the supply-to-demand ratio hit 1.8:1 in the first half of 2013; and sales fell 22 percent compared to the same period of 2012.

The CBRC's branch warned in October 2014 that the property industry was in trouble and the situation would worsen. It also said developers were likely to have trouble repaying loans.

It was quickly proven correct. Chengdu's vacancy rate for office buildings reached 40.8 percent in the first quarter of this year, up from 35.9 percent at the end of last year, reported Jones Lang LaSalle, a real estate service and investment company based in Chicago. Oversupply also caused monthly rents to fall to 97.1 yuan per square meter, down 3.2 percent from the first quarter of last year.

Banks were quick to realize a storm was brewing. They started providing fewer loans to developers and individuals involved in commercial property, and China Merchants Bank stopped extending loans to players in the sector altogether.

Developers argue the government should help solve the problem they have selling and renting out commercial properties. Said one: "The government's planning caused the oversupply, and it should provide solutions."

Chengdu should also improve its infrastructure, the developer said, and lure new companies to the city, such as start-ups.

The city's government can say it tried in this latter regard. It offered tax cuts totaling 10 billion yuan to the Taiwanese technology company Compal Electronics Inc. to open factories in Tianfu New Area in 2010. But declining laptop sales prompted the company to move to Southeast Asia last year.

A developer named Minyoun Industrial Group Corp Ltd. has cooked up a solution of its own: later this year it will launch a program that allows small companies to share office space. Industry insiders say the model has worked in Beijing, and could work in other cities.

Whatever the solution to the problems in Chengdu's commercial property sector, the developer mentioned earlier says it must involve the government.

"The root of the problem is government planning," he said. "It plans too many office buildings. Chengdu is a good city, but it's not like Beijing, Shanghai, Guangzhou and Shenzhen, which have lots of good companies."