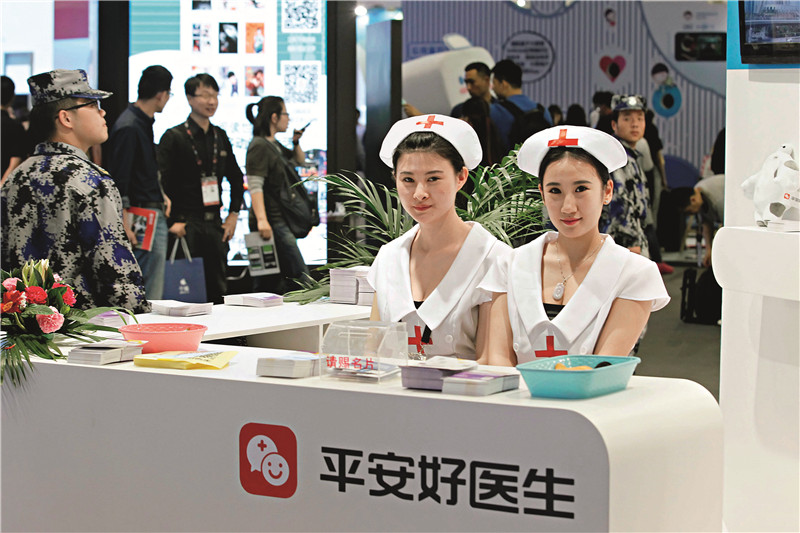 (Beijing) – A vision for future health care services described by Dr. Eric Topol in his famous book The Creative Destruction of Medicine is becoming reality in China, earlier than many experts expected.

Topol discussed how new technology is making the delivery of health care more effective, and argued a digital revolution could spur unprecedented changes in the medical industry. And in China, an increasing number of online health care information and service providers are testing the waters regarding the expansion of their services offline by opening brick-and-mortar clinics, forming a new business chain that combines traditional health checks with Internet technology.

Chunyu Yisheng, a smartphone application firm that lets users consult with physicians regarding health problems, announced in May that it has launched 25 clinics and will expand the number to 300 in 50 cities by the end of the year. Company CEO Zhang Rui said offline clinics will become the major profit sources for its doctors and will be the company's future business focus.

Established in 2011, Chunyu has signed contracts with more than 100,000 doctors at hospitals across the country to offer online consultation to its 58 million registered users. Many of the doctors will be invited to work in its clinics in the future.

More health-related Net companies are getting into the act. Also eyeing offline services are DXY.cn, an online forum for health care professionals; Guahao.com, a health information portal and search site; and Ping An Good Doctor, a health care app.

Yu Ying, a doctor in the capital, said the opening of clinics by Internet players will offer a new solution for the medical sector and rebuild the health care service system. Many industry experts say the new facilities could provide an impetus for finding solutions to the deeply rooted problems in China's medical sector, some of them stemming from a system dominated by public hospitals. One view is that while the role hospitals dominated in the past, the role of doctors will be more important in the future. It is also possible that the new clinics will provide patients with more options, diversifying the market.

The idea of Internet-led clinics has been heating up since the beginning of the year, attracting the attention of investors, and market players are testing different approaches.

On May 7, Chunyu said it had opened 25 clinics in the major cities of Beijing, Shanghai, Guangzhou, Hangzhou and Wuhan. Instead of building new clinics, Chunyu chose to partner with existing hospitals and clinics. A source close to the company said the hospitals offer space and equipment while Chunyu provides doctors and Internet-related services.

"Chunyu's investment in offline clinics is small," Zhang said. "It is mainly spending on doctor salaries, building the management system and setting standards."

Zhang Qiang, the founder of Dr. Smile Medical Group, said his private medical service provider is counting more on new technology, including wearable devices and mobile Internet, as growth points. He said the company received 50 million yuan from investors to support its "future clinic" business plan, which is set to launch clinics in Beijing, Shanghai and Hangzhou within a year.

Other firms are planning heavier investments in brick-and-mortar clinics. DXY.cn has been planning offline clinics since late last year. Its founder, Li Tiantian, said the first one will open in Hangzhou, in the eastern province of Zhejiang, and a chain of facilities will follow. "No matter whether it is a clinic or a small hospital, it will allow patients to communicate with doctors and complete some basic health check," Li said.

However, Li said that opening the facilities involves a complicated process of getting government approval, and DXY.cn is still waiting for a regulatory nod.

Insurance company Ping An Insurance Co. also plans to invest 50 billion yuan over the next decade to establish 10,000 new clinics across the country, connecting them with its new medical service app Ping An Good Doctor.

However, investors said they will be cautious about making big investments on new facilities. One investor focusing on the Internet medical service sector said deals involving new clinics are risky since many Net companies do not have stable profit models. "Every clinic requires investment of at least 200,000 yuan and more in follow-up," the investor said.

The rise of the Internet-related clinics is expected to revamp hospitals' salary and assessment systems for doctors, something many physicians say is too rigid and fails to provide incentives.

Liu Chengping, an executive at Chunyu, said the most complicated part of the company's clinic project is building an efficient salary system for doctors. Liu said the doctors' academic achievements and work experience are the major factors that must be considered, and in the future their service record and patients' feedback will also be taken into account.

"Most patients only need three to five offline diagnoses every year and the remaining services can be completed online," Liu said. "It will improve doctors' efficiency."

Dr. Smile is making a bigger move, changing the relationship between doctors and medical institutions. The company has set up seven teams with different specialties under its so-called physician hospital partnership. Under the arrangement, physicians sign contracts with Dr. Small, which introduces them to medical institutions where they provide their services.

Dr. Smile's Zhang said that in this arrangement doctors and the company are partners, instead of having an employee-employer relationship. The company also encourages physicians to play a bigger role in the management of the firm.

Experts said these efforts will give doctors greater independence, which will mean changes to the medical insurance system. Dr. Smile's Zhang said that since doctors are strictly attached to hospitals, medical liability insurance is imposed on hospitals, creating a lot of disputes between doctors and patients.

"The real medical liability insurance should be imposed on individual doctors," Zhang said. "Insurance companies can track their records to decide premiums and compensation."

Medical procedures are also expected to change. "We hope medical procedures can be divided into the part that can be done online and those need offline diagnosis in order to improve the efficiency of medical resources," said Yu, the doctor in Beijing.

The medical sector investor said the clinics run by Internet companies will also play a role in introducing more patients to hospitals for follow-up treatment, encouraging private investment in the medical sector. Chunyu's Zhang said that "private hospitals around the country are coming to us because we bring high added-value patients to them."

Critics say that since most public hospitals are running at full capacity, the clinics linked to Net firms can only partner with private hospitals, and some of those are substandard.

But many in the sector agreed the emergence of the new clinics will have profound changes on China's health care industry. The only question is how long will it take.

"Everyone is testing and observing, nobody knows which model is the best," said Cai Jiangnan, a medical policy and management professor at China Europe International Business School in Beijing. But these experiments are already making the county's health care industry more diverse.