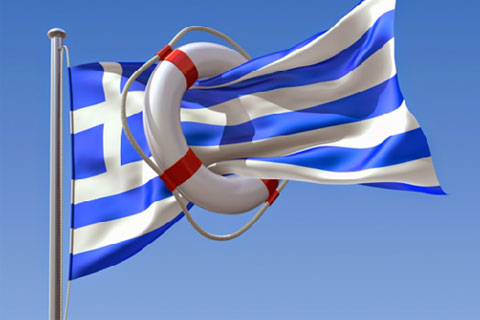 Greece and its European creditors reached an agreement on July 13 aimed at resolving the country's lingering debt crisis. The agreement, which requires the approval of the Greek parliament, does not give Athens a guarantee on a new bailout. Rather, it allows for new negotiations to start on a bailout worth billions of euros.

Those talks are seen by many as the last chance for the country to avert bankruptcy and stay in the eurozone after Greek voters overwhelmingly rejected a similar package in a referendum on July 5.

Since the Greek debt crisis erupted in 2009 amid a global economic meltdown, the country has been reviled in the media for being irresponsible in its retrenchment efforts. As their economy deteriorated, Greeks dismissed three administrations under highly volatile circumstances.

However, if we simply view the crisis as a farce, we miss the chance to learn a hard lesson: if a country fails to fix its problems at home, it becomes prone to market contagion, as Greece's experience with the global financial crisis has shown. Many people believe crisis can force governments to undertake reforms, but this will not happen unless politicians are willing and enjoy the support of their people.

Contrary to the popular impression that the Greeks are being stubborn, they have actually tried to lift themselves out of their mess. From 2010 to 2014, the government cut public spending by the equivalent of 4.2 percent of Greece's GDP each year, something few developed countries have done since World War II.

Meanwhile, Greek authorities hiked tax rates to pump up government revenues. However, the country's fiscal deficit still spiked due to a contracting economy, forcing the government to turn to creditors to stay afloat.

Since 2010, Greece's GDP has shrunk by one-quarter and its jobless rates have soared by a similar percentage. More than half of its young people are unemployed.

Many in Greece contend that a lack of diversity in their economy and overspending on social welfare have hurt its competitiveness, but they are also angry at the "troika," the European Commission, European Central Bank (ECB) and International Monetary Fund over its insistence on austerity, which has done little to boost Greece's economy.

As a matter of fact, creditors in the European Union, including Germany and Italy, have urged Greece to make changes to invigorate the job market, ease barriers to market entry and deregulate prices. However, those proposals did not move forward, to the dismay of creditors, who argue that similar moves have worked well in other debt-ridden countries, such as Ireland, Portugal and Spain.

The economic slump is only partially to blame for Greece's debt woes. That the country is unable to compete with other economies is also the result of a bloated government troubled by influence pedaling, vested interests and meddling by powerful oligarchs. Greece's tax regime is also flawed, leaving it vulnerable to abuse by the rich.

All these problems are rooted in clientelism, which has dominated Greek politics since the country embraced democracy in the 1970s. Clientelism sees politicians woo voters with promises of jobs and better social welfare. This gets them elected, but comes at expense of public coffers.

The center-left PASOK and right-wing New Democracy parties that took turns running Greece up to the end of last year both made clientelism a centerpiece of their administrations. Both parties bowed to creditor pressure to come up with reform plans in recent years, but these efforts were greatly compromised by political elites.

Meanwhile, the vast majority of people – from pensioners living on dwindling funds to young people struggling to find a job – are left to bear the brunt of the economic crisis.

In the hopes of finding a way out, disillusioned voters handed power to the far left Syriza party in January. The party led by the current prime minister, Alexi Tsipras, pledged to wage war on tax evasion and to fight graft and the powerful oligarchs. Those promises struck a chord with voters, but Tsipras has been preoccupied by negotiating with creditors on a bailout plan that focuses on economic growth instead of belt-tighting.

To up the ante amid the five months of talks with European creditors, Tsipras called for a referendum on July 5 in which voters threw out an EU bailout plan by a broad margin. On the surface, the Greeks and democracy won out, but this only deepened the divide between the country and the EU.

As the Greek debt crisis continues unfolding, the ECB and other international organizations with stakes in the matter have responded by putting up safeguards so that any impact on international finance will, it is hoped, not be fatal.

But the damage has been done. European creditors are distrustful of the Greeks, and the debt crisis has dealt a blow to the EU's push for greater unity among the 28-nation bloc.

The Greek economy enjoyed robust growth from 2000 to 2008, with its GDP nearly doubling. The hosting of the Summer Olympics in Athens in 2004 was held up as a symbol of prosperity.

But an economy weighed down by corruption and inefficiency disintegrated in the following years. Many governments around the world are dismayed about what is happening in Greece. Perhaps they should use this opportunity to take a hard look in the mirror and learn something from what they see.