Use Sense, Not Stubbornness to Deal with Drug Addicts 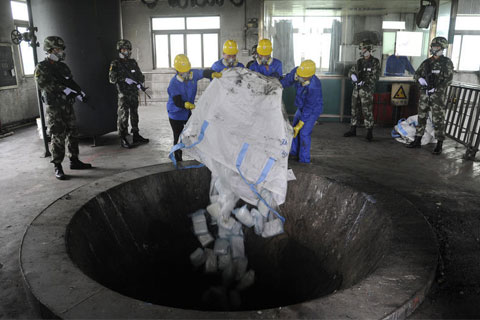 Drug-related crime is spreading across China. A recent report by the National Narcotics Control Commission, which is run by the Ministry of Public Security, said the problem increasingly involves new types of synthetic substances. This is happening even as the government steps up efforts to combat the trafficking and use of illegal drugs.

Drug-related crime used to be concentrated in frontier and coastal areas, but now it can be found in every corner of the country. Government data show the country has 2.95 million drug addicts, but the actual number is believed to be closer to 14 million. In short, China is becoming a country of modern narcotics production and consumption.

To stem the tide, the government has increased its anti-narcotics efforts over the past year to the level of a national security strategy. Both the commission and the Supreme People's Court have held major meetings to discuss new measures and stressed the severe punishment of drug-related crimes.

Narcotics are obviously quite hazardous to physical and mental health, but they also damage political and social institutions and threaten public safety. Even developed capitalist countries are accustomed to using prison terms to mitigate their drug problems. But using state punishment for drug abuse is probably the most obvious example of criminal sanctions being improperly applied.

It is certainly reasonable that China adopt a strict policy. The problem is that cracking down will not get at the root of the addiction problem. Worse, it can even obscure the essence of the issue and lead to unsatisfying outcomes. The unprecedented attention that the central government is paying to the problem will no doubt help mobilize social resources. But if the courts ignore the complexity of drug-related issues, they will end up distorting the central government's policy.

The narcotics problem has two tiers: substance abuse and the resulting crimes. They are two sides of the same coin. Only demand for drugs leads to smuggling and illegal sales, transport and manufacturing.

The British scholar Michael Gossop argues in his book Living with Drugs that it is human nature to seek an alternate state of consciousness and taking drugs is the quickest way to do it.

As Chinese society evolves and people have mostly solved their basic needs for survival, demand will inevitably grow for ways to enhance subjective values and self-awareness. Of all animals, humans are the most eager to pursue happiness and a state of bliss. Unless we can confront the desire to alter our consciousness, eradicating drug abuse will remain only an ideal. If we think about it this way, then we see that consuming illegal substances is another social issue rather than something to be regarded as demonic. "The danger of drugs isn't a purely chemical notion, rather it is more of a legal and moral concept involving a value judgment," one academic says.

The dangers of narcotics go well beyond their pharmaceutical properties. But the extent of those dangers is in large part determined by the way a country controls drugs. For instance, if a user's fundamental rights as a citizen are not respected and they are merely associated with moral corruption, then discrimination and prejudice against them will only lead to the problem going underground. Once narcotics use becomes an underground issue, the dangers become harder to control. But if the public realizes that addicts are patients that require treatment, we can abandon prejudice and be open-minded in addressing the problem under the national health care system. In this way, narcotics-related crimes could be better controlled.

He Ronggong is an associate law professor at Wuhan University