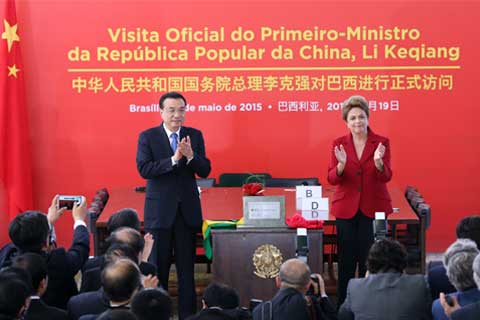 (Beijing) – Officials from some of China's biggest and best-known manufacturers stood by Premier Li Keqiang's side during a recent Latin American junket, underscoring unified support for the latest phase of the country's "going-out" strategy.

Li visited four countries over the course of nine days, signed several multibillion dollar business deals in energy, agriculture and infrastructure, and struck an agreement with his Peruvian and Brazilian counterparts for a feasibility study that could lead to the building of a railroad linking the Atlantic and Pacific oceans.

Back home, the financial community was mulling over this new push for overseas business. Bankers, insurers and financial analysts tracked Li's Latin America trip and followed his subsequent stops in Belgium and France, where he stressed China's interest in cooperating with manufacturers and construction companies.

Financing has been the lifeblood of the going-out initiative, which began in 2000 and has been expanding over the past year with the rollout of the government's "belt and road" infrastructure and trade investment plans as well as the new China-led Asian Infrastructure Investment Bank.

To date, most overseas investments by Chinese companies have been well supported by the country's policy lenders and state-owned banks. Mines in Australia, dams in Africa and factories worldwide owe their success to strong financing. Moreover, the government has so far pledged US$ 100 billion for the development bank, far more than any other member of the 57-nation institution.

But funding for the strategy's next phase may prove more difficult. While Li and company delegates were shaking hands in Latin America, some company executives in China were shaking their heads in frustration over a lack of financing for overseas projects.

An executive at state-owned China International Water & Electric Corp. said that "many" of his company's overseas projects for which contracts have already been signed "can't get started due to financing difficulties." Most of these projects are in developing parts of Asia, Africa and Latin America.

A banker at a state-owned lender who asked not to be named said Chinese banks have been more cautious about issuing loans for overseas businesses such as production projects, compared to construction projects. Fueling this caution are growing risk concerns as banks lack a way to assess risks, the banker said. Some financial experts say China's banks are simply ill-equipped to meet the tough demands of overseas financing.

"Most banks haven't set up departments that can evaluate and control international risks," said Zhao Changhui, chief risk analyst at the policy-focused Export-Import Bank of China. "Compared to the overseas expansion efforts of companies, Chinese banks are at least 10 years behind."

To complement Li's international junket, in May the State Council promised to encourage overseas business partnerships between domestic and non-Chinese manufacturing companies through preferential tax, financing and government service policies.

Since last year, Gu said, NDRC officials have been negotiating with the governments of several countries for manufacturing cooperation projects. The talks have involved Kazakhstan, Indonesia and several African countries, he said.

So far, however, not a single Chinese bank has agreed to support the collaterization plan, the person said. As of mid-July, bankers were studying the proposal but none had made any changes.

Currently, Chinese banks only accept domestic assets as loan collateral. Moreover, a bank will typically finance an overseas project by extending a loan to the domestic parent of a company with overseas subsidiaries and projects. As the bankers see it, overseas-based loan collateral presents unacceptable risks and complications.

Companies seeking deals overseas often have to grapple with the gap between the interest rates on yuan-based loans and those denominated in U.S. dollars. The latter are generally less expensive than yuan loans issued by domestic banks, said the executive at China International Water & Electric, a fact that can complicate business negotiations between domestic firms and potential partners in other countries.

"Companies expanding overseas need a convenient financing mechanism, strong insurer support and a sustainable, professional" staff, said a legal adviser for the state-owned contractor Power Construction Corp. of China. But many policies that would support such a mechanism "haven't been well implemented" by government agencies, he said.

The NDRC recently simplified the process through which the government approves or rejects companies' plans for overseas investments, Zhang said. State-owned and private companies are legally required to seek either central or local government permission for every overseas business project, with application procedures determined by the size of the proposed investment.

From July 2014 and to March, Zhang said, companies asked the NDRC to approve more than 500 overseas investment projects, each worth more than US$ 10 million. If every project gets a green light, he said, these firms will invest a combined US$ 100 billion on top of whatever their foreign partners provide.

The government's China Development Bank as well as the China Export and Credit Insurance Corporation (Sinosure) are also continuing to back the expansion effort. Insurance policies worth US$ 117.9 billion were written by Sinosure in the first quarter, up 11 percent from the same period last year, according to an employee at the insurance agency's branch in the eastern province of Zhejiang who asked not be named.

In Brazil, Li proposed strengthening business, social entity and government ties between China and Latin American countries for investment in logistics, power and information technology sectors. He also called for financing projects through a variety of channels.

The kinds of cooperative projects on Li's agenda would pave the way for creating entire industrial chains for manufacturing and construction projects in countries that agree to partner with China. In this way, domestic manufacturers would work with non-Chinese counterparts rather than export made-in-China products. And Chinese construction firms would build infrastructure alongside local partners.

Cooperative projects with China would help a developing country accelerate economic growth and open new markets for its goods while holding down costs, Li said at the opening of a China-European Union business summit in Brussels on June 29. China would benefit from such arrangements by upgrading its industrial chain, he said.

The plan was well-received by many countries. A government official in Brazil said the proposal outlined by Li would help meet infrastructure development demand in his country. And the government of Chile has launched talks with China that could lead to cooperative manufacturing and railroad-building projects, said Andreas Pierotic, the economic and commercial affairs counselor at Chile's embassy in Beijing.

Companies in many industries targeted by the NDRC for the initiative "are facing an urgent need to transform domestically" due to overcapacity and the slowing economy. Yet these same firms make products or offer services that are in demand overseas, said Zheng Jun, general manager of China-Africa Lekki Investment Ltd., a CRCC financing subsidiary. "Moreover, these industries can generate demand for other sectors" of China's economy.

But these "companies face greater challenges due to higher international standards" for business operations "and fiercer competition," Zheng said.

Some analysts have called for deeper cooperation between domestic and future overseas partners. They say companies could work together not only on production but also management, research and product development.

One sector that's been particularly attractive for companies is infrastructure construction, for which demand is said to be steadily rising worldwide.

"Developed countries in Europe and America need to upgrade their infrastructure, while developing countries are counting on infrastructure construction to encourage industrialization and urbanization," said Long Guoqiang, a deputy director at the Development Research Center (DRC), a State Council think tank.

A CDB analyst who asked not to be named said companies have for many years been busy gaining wider market access and building up their reputations abroad by focusing on foreign sales of domestically made goods and short-term building contracts. Now, as the campaign to look overseas broadens, they're ready for the next step.

However, "it will be a long journey," the analyst cautioned.