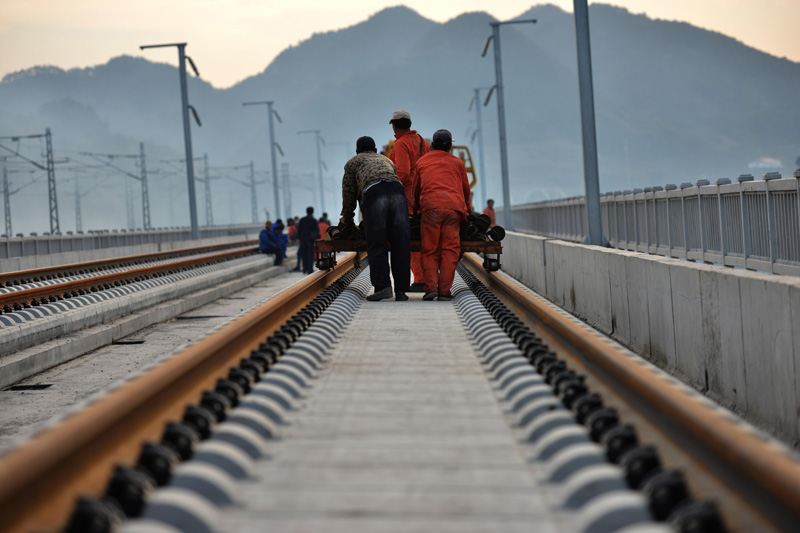 (Beijing) – Quality control checks that the country's railroad operator is conducting on parts used in trains in a bid to ensure plans for increasing exports are not hurt have found that many brake pads used on freight trains fall short of standards.

China Railway Corp. (CRC) examined 14 high-friction brake pads used in freight trains from 10 manufacturers and only four passed quality tests, the CRC said in a report that Caixin has seen.

Substandard pads would lengthen the distance needed to stop, especially in an emergency, said a source at China Railway Rolling Stock Corp. Ltd. (CRRC), the state-owned producer of trains.

Some of the substandard products were made by the Beijing Railway Bureau, the Zhengzhou Railway Bureau and Aviation Industry Corp. of China, the report said.

The report said the CRC will not use any of the faulty brake pads on freights trains, and it told manufacturers to improve their products and apply to have them reexamined within six months before or they will not be used anymore. The CRC also said it will demand compensation for the pads it has bought.

The CRC and the National Railway Administration, which regulates the rail industry, are carrying out more quality-control checks this year than in the past, a person who works at the CRC said. In previous years the CRC would perform four rounds of checks, but it has already done that many this year, the person said.

The scope of the examinations has also been broadened, the source said, adding that brake parts were checked this year for the first in many years.

Some substandard products identified in check this year were made by CNR Corp. Ltd., the CRC said in its report. The country's two largest rail equipment producers, China CSR Corp. Ltd. and CNR, merged to form CRRC in June in an aim to create a more competitive player exporting bullet trains.

The MTR Corp. Ltd., the firm that runs Hong Kong's subway system, recently placed an order for 93 trains from CRRC with a total value of HK$ 6 billion. The new trains will be delivered between 2018 and 2023. The trains will undergo rigorous safety testing before going into use and the company will place employees at the factory to ensure quality, an MTR official said.

CSR and CNR were fined in Australia and New Zealand at the beginning of 2014 because brake shoes contained the banned material asbestos. The companies had to replace the parts.

China has built a large network of ordinary and high-speed trains in recent years and now wants to ramp up exports. The country's leaders frequently make sales pitches during their visits to foreign countries, and there are some signs those efforts are paying off. China has agreed to help build two lines in Thailand, and one of its companies is helping design a project in Russia.

The country's rail industry it trying to move out of two shadows that have hovered over it in recent years, namely a graft scandal that ensnared the former minister of railways and many of his associates, and a crash that killed 40 people in the eastern city of Wenzhou in 2012.