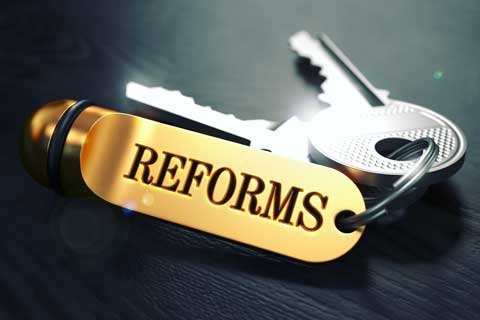 The State Council has released a long-awaited plan for overhauling state-owned companies, laying out the principles for reform to proceed. Among the highlights of the new cabinet document are initiatives to introduce modern corporate governance to state-owned firms to improve oversight and transparency, and bringing in private shareholders to make the companies more competitive.

Many people in China still see state-backed firms as an integral part of strategically important sectors. However, as the economy slows, many of the companies are struggling to stay profitable, so it would be better for changes to come sooner rather than later.

These changes should not be done piecemeal, as we have seen in the past. Instead reformers must strive to put in place a sound oversight system to improve the efficiency and competitiveness of companies.

Over the past three decades, the state sector has undergone several rounds of reform. In a major overhaul at the turn of the century, many loss-making state companies were ordered to trim their workforces, a move that many felt was needed for them to stay afloat. Big state banks stricken with bad loans were allowed to transfer billions of yuan in outstanding debts to government-backed assets management firms so they could start over. That move later gave rise to many bloated state conglomerates.

In 2013, the central government launched a new plan to strengthen corporate oversight at state firms. It was followed by a series official documents aimed at preventing losses of state assets, among other things. The State Council has also started a program to curb outrageously high salaries for senior executives at major state-owned firms.

In Guangdong Province and in Shanghai, the authorities have tried pilots to bring in private investors in a bid to make state-run companies more competitive.

However, most of the changes are little more than cosmetic surgery that fails to address underlying problems. What the firms need most is a board of directors system, which is a core aspect of the modern corporate structure. Reforms should also aim to attract the right talent with competitive packages, and these people should be allowed to run a company free of meddling by officials.

But in China, many state-run companies lack boards. Those that do have one see it dominated by executives appointed by the Communist Party and government officials. The chief executive officer often serves both as chairman and president, making oversight all but impossible.

But at the third full meeting of the 18th Central Committee in November 2013, the party decided that transparency and entrepreneurship should the top two priorities in reform of the state sector. The State Council is also moving in the right direction, with efforts to introduce boards at companies to strengthen oversight of executives and bring an end to interference in daily affairs by government officials. This change could also help rein in rampant corruption and nepotism, problems that beset the state sector.

However, a board of directors can do its job only if it can operate independently and each director can play a proper role in decision-making. As major stakeholders, regulators, namely the supervisors of state assets, can still have a say in decision-making, but they should refrain from meddling in daily management.

The latest State Council document, which has been in the making since late 2013, has been watered down to accommodate the interests of all parties involved, according to people involved in its drafting. One sticking point is how to reconcile the role of the Communist Party with a modern corporate structure with boards of directors at its center. The party could still maintain a presence in state-owned companies to maintain ideological control, but this should not come at the price of efficiency and transparency.

For so long, a party committee at a state-owned company has tried to act as the board and the party secretary has served as the president or chairman, an arrangement prone to corruption and abuse of power.

Even as the country faces a range of economic woes, some people still want to play the ideology card, arguing that state-run companies should not only be judged by their profitability but also in accordance with other criteria, including allegiance to the party. If these views are not properly debated, they could get in the way of urgently needed changes and we might end up seeing more state-owned firms become unprofitable.

The failure of previous reform plans had much to do with complex issues at state-backed firms and precautions that regulators thought they needed to take. However, it also resulted from the resistance of vested interests, something that remains a source of concern.