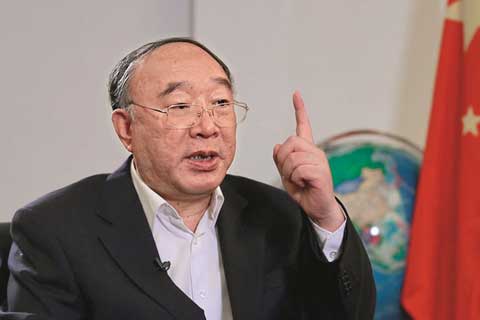 (Chongqing) – The southwestern city of Chongqing has taken a big step toward reforming its system of household registration, known as hukou, by granting urbanites and people living in rural areas the same access to social welfare and public services, the government announced in early September.

The city also promised it would make it easier for farmers to settle in urban area, abolishing some rules that have been blamed for hindering free movement across regions.

However, those moves were just the latest efforts Chongqing has made in the hopes of boosting its growth as the country rapidly urbanizes. The city's government was the first in the country to adopt "land tickets," an experiment that allowed farmers to sell usage rights for idle farmland as long as the authorities gave their permission. The four-year-old program has seen a total of 10,000 hectares of rural land turned over for industrial or commercial development.

Chongqing, which is home to nearly 29 million people and is a major source of migrant workers, has become a rare economic and manufacturing hub in China's vast, underdeveloped west. Over the past few years, the city has served as inland China's reform testing ground and gotten attention for its continuous efforts to make progress in land management and the hukou system, which gives holders the rights to a range of public services, from health care to schooling.

"Chongqing is enjoying a bonus from its reforms of the hukou system," said mayor Huang Qifan, a major backer of the city's reforms and its mayor since January 2010.

Those attempts at progress have not hindered economic expansion. The latest official data show that Chongqing had GDP growth of 11 percent in the first half of the year, the highest figure of any of the 31 provinces, regions and municipalities and outpacing national growth by 4 percentage points.

Last year was no different. Chongqing had growth of 10.9 percent in 2014, better than any other part of the country.

In a recent interview with Caixin, Huang said he expected Chongqing to continue to grow robustly over the next few years. He also explained the land ticket program and measures his government plans for handling migrant workers. Excerpts of his interview follow.

Caixin: How is the "land ticket" program going?

Huang Qifan: In 2007, the State Council assigned Chongqing to a pilot program for rural-urban reforms. I was the deputy mayor then and we started to consider the "land ticket" issue. Based on experiences abroad, urbanization leads to higher efficiency of land use because rural construction is usually less dense than that in urban areas. But in China, while a large number of farmers have moved into cities in recent decades, their rural land remained idle and could not be transferred to someone else. This is unreasonable and the problem needed to be solved. It was a big task for Chongqing and also for the whole country.

China uses about 500,000 hectares of rural land for construction every year. This land is expropriated by local governments after winning approval from the Ministry of Land and Resources. Alternatively, if we can give farmers who have left rural areas a "land ticket" for their property that can be auctioned in land exchanges and urban developers can only get the land by buying the ticket, a market-oriented system will be established. Based on these ideas, we invented the land tickets.

In practice, what are the major sources of land for the land tickets?

There are three situations. First, farmers who migrated to cities who agreed to give up their land. Under current regulations, the plots owned by farmers cannot be sold on the market. Instead, they can only sell or rent the properties among the rural collective organizations in which they belong. In most cases, farmers found they earn very little from their land. But with a land ticket, they can trade the land in the market for a better price.

Second, many rural, collectively owned companies have gone out of business. The idle land from these companies and plants can also be sold through land tickets. These assets belong to rural governments or collectives, so the money goes to rural collective and all farmers can also benefit.

Third, renovation of old rural houses will create some spare land. This land can be issued a land ticket and generate income for farmers who sell it.

We have also established a rule that only commercial developments, such as residential and official buildings, should get land by buying land tickets from the exchange, while construction of factories, hospitals, schools and other infrastructure should apply for a government land quota as usual. Therefore, commercial developers will pay for the land at market price that is affordable to them but will also generate more income for farmers.

What are the effects of the land ticket system and what's the market potential?

The land ticket system improved farmers' incomes and offered financial support to migrant workers who left their rural homes. It also better protects farmland and eases the conflict between urban demand and rural supply of land. The system also generates capital to support rural housing renovation and other activities. For instance, land ticket sales in Chongqing have been worth more than 30 billion yuan. Of that, more than 6 billion yuan was paid to migrant workers who moved into cities. By selling their rural land, each household can earn more than 100,000 yuan, helping them to start new life in cities.

Generally speaking, the land ticket system has had a good effect, which, as the central government vowed, allows rural areas to share the benefits of urban development. Chongqing has about 18 million farmers, who own more than 300,000 hectares of rural land. A small portion of this land may get land tickets. It is a market-oriented process and takes time. During this process, the efficiency of rural land use can be increased, meaning farmland will not reduce with the expansion of urbanization. Over the past few years, Chongqing has not seen a decline in its amount of farmland. I am confident that by 2020, when Chongqing's urbanization rate reaches 65 percent, our farmland will even see an increase.

Is Chongqing's land ticket system linked to the hukou system? For instance, can rural residents get an urban hukou when they sell their land?

They are unrelated. Rural residents can get urban hukou after years of working and living in cities. But when they are settled down, they may need to think about how to deal with their rural land. Without the land ticket system, they may have to leave the land idle or give it to relatives. The land ticket offers them a way to cash in on their land.

What is the situation for rural migrant workers in Chongqing and the hukou issues related to them?

Since 1997, Chongqing has had a total of 9 million migrant workers who left their rural homes to work in cities; 4 million working in other provinces and 5 million in urban areas of Chongqing. For rural workers coming to Chongqing, whether they are from the city or other provinces, they can apply for urban hukou after they get a stable income and meet certain requirements. And they enjoy equal access to public services as urban residents, such as pension, housing, health care and access to education. Meanwhile, migrant workers can keep their property and land rights for their rural homes.

Over the past few years, a total of 4 million rural workers and their families have received urban hukou in Chongqing. Chongqing is pushing forward with reform of the hukou system because as migrant workers settle down in cities, they will create more consumption while their own living standards will be improved. It will support the development of business and industry.

In recent years, we have noticed an interesting phenomenon in which Chongqing's foreign trade surges 70 percent to 80 percent in the first quarter every year and drops to a normal level in the following quarters. After analysis, we found it is a bonus from Chongqing's hukou reform for migrant workers because those in coastal provinces all return home for the Lunar New Year holiday for the first couple of months in the year, and many factor owners moved their orders to Chongqing since plants here run throughout the year.

Are the land ticket and hukou reforms specially fit for Chongqing or they can be copied in other provinces?

It depends on the cities' functions and positions. For instance, a mega city with a population of more than 20 million that already has a huge GDP from financial sector may not need to attract another 10 million migrant workers for it industries. But if a city wants to develop industry, it needs to help migrant workers settle down. Whether a city should attract more people and how it should do it are related to its industry. Population follows industrial demand, and industry is determined by a city's function.