Loan Crisis in Hebei Gets Worse with Executive's Stabbing 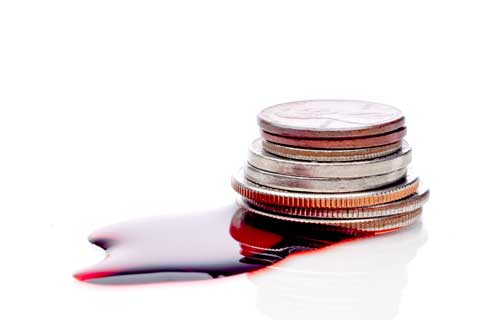 (Beijing) – A months-long impasse over debt problems facing the country's second-largest loan-guarantee company has frustrated many investors, and one recently vented his anger by stabbing the CEO of a related asset management company at a meeting.

Hebei Financing Investment Guarantee Group Co. Ltd., a state-owned company that has its headquarters in the northern city of Shijiazhuang, has been in trouble when it was discovered in April that it lacked the capital needed to repay loans it guaranteed.

Banks started calling in loans to companies that used the firm's guarantees to borrow money, forcing them into liquidity shortages and defaults. Hebei's government has pushed for a deal between borrowers and lenders while trying to keep the guarantee firm open, but little progress has been made.

Global Wealth (Beijing) Investment Co. Ltd., an asset management firm, has lent out about 630 million yuan from about 660 investors to companies backed by Hebei Financing's guarantees. All those companies have defaulted on their debt, Global Wealth has said. The guarantee firm could not make the repayments either.

Angry investors in Global Wealth have called for a meeting every week with the firm's executives since May so they can be briefed about progress on efforts to recover their money, a person who attended the talks said.

During the meeting on October 11, an investor stabbed the firm's CEO and general manager, Wang Jie, in the chest, injuring him badly, people who witnessed the incident said.

“(The attacker) sat down next to Wang like nothing was wrong," but while the meeting was going on, he suddenly drew out a knife and stabbed Wang in the chest, one person who was at the meeting said.

Wang suffered a wound about 15 centimeters long on the left side of his chest, he said. He was rushed to a hospital, where he remained in critical condition until the next day, people close to the situation said.

Police detained the assailant and charged him with attempted murder, the sources said.

The police have not made an announcement regarding the attack.

An employee of Global Wealth said the firm lent out almost all of the 630 million yuan it received from investors and 80 million of its own capital to companies in Hebei Province, all of whom borrowed money with Hebei Financing's guarantees.

Since the guarantee company got into trouble, Global Wealth has barely managed to stay in business in the face of the investors demanding their money back, the employee said. Many people have quit, and those who remained faced “not only pressure in terms of finances but also a lack of guarantee for their personal safety," he said.

At least 50 financial institutions – ranging from banks and trust companies to securities firms and peer-to-peer lending websites – have worried since April they would lose their money if the problem with Hebei Financing persisted.

A group headed by Hebei officials has been trying to find a solution to the problem by bringing together financial institutions, borrowers and the loan guarantee company in the hope that they can reach a deal.

That body announced a plan on September 9 that it said represented an agreement among the three sides to keep Hebei Financing open while continuing to look for ways to help borrowers repay their debts.

However, that plan has been no help, the Global Wealth employee said. In all the meetings, “the representatives from the borrowers whine about their hardships, while those from the guarantee company remain silent," he said.

“We as the party who lent the capital have suffered too, but we cannot say it," he said.