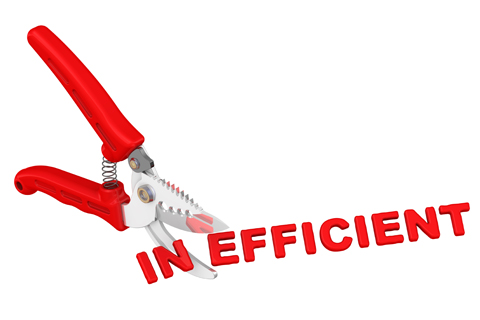 The 2015 Central Economic Work Conference held from December 18 to 21 laid out priorities for next year's economic policies. Topping the to-do list was reducing excess capacity, a task that is crucial to achieving other goals. In fact, the job is so important the government must act now.

Progress on reducing excess capacity has been extremely slow over the past two years despite mounting worries about the glut. Some officials have downplayed the role the government needs to play and said the invisible hand of the market should sort things out on its own. This claim is delusional and neglects the fact that the problem would not be so bad if it were not for bureaucrats pushing for heavy investment in the first place. The government's visible hand is to blame for distorting the market, so let's not pretend it has suddenly become irrelevant.

In fact, respecting the market means the government needs to undo the damage it has done. It has to stick to reform however painful and take measures to soften its impact.

Excess capacity is dragging down the economy. This is most evident in energy-intensive and inefficient industries, such as coal mining and steel production. Provinces that were hit the hardest by overcapacity, including coal-rich Shanxi and the northeastern provinces of Heilongjiang, Liaoning and Jilin face challenges unseen in more than a decade. The risk is contagious, spilling into the financial sector and fueling concerns of a systemic collapse.

The central government is committed to reforming state-owned "zombie enterprises," firms that have no real operations and rely on government bailouts. Premier Li Keqiang reaffirmed this commitment in a recent meeting of the State Council's top committee, saying that companies in discouraged industries that have lost money for three straight years must be sold, restructured or closed and liquidated, so that by the end of 2017, operating losses coming from them are "significantly reduced." These requirements point out the direction to follow in cutting excess capacity and provided a timetable to measure its progress.

The government needs to push reform where it is most difficult. Many companies, especially SOEs, owe their expansion to reckless investments driven by local governments' hunger for high GDP growth rates. Still lacking budget discipline to this day, they would expand blindly in a good market and turn to the government for bailouts when the tide turns. They are nothing but a drag on the country's economic transformation because they serve no end. They just waste valuable resources that could have been used by emerging industries and promising entrepreneurs.

The reason we have not made much progress cutting excess capacity is rooted in government officials' deeply seated fear that a change could harm social stability. All too often, a local government lets a zombie enterprise live on because it wants to protect economic growth and keep employment stable. Some officials want others to do the heavy lifting in the hopes they can avoid difficulties. This only exacerbates the overall risk.

Some officials have recently placed their hopes of avoiding painful reforms on the "belt and road" initiatives, arguing that they will export their way out of excess. But new markets opened by these programs will not be big enough to absorb all of China's excess capacity. We have already witnessed backlashes in some developing countries against China's steel exports. Such resistance will become stouter.

Cutting excess capacity will be painful, as short-term deteriorations in economic indicators will no doubt inform us. Some will lose their jobs. But history has proven that there are no pain-free reforms. It has also showed us that the longer change is put off, the greater the pain. In the 1990s, China promptly and bravely reformed many SOEs. In Shanghai, the number of employees in state-owned textile factories shrank from nearly 470,000 in 1992 to 150,000 in 1998. Now the figure is less than 20,000. That was the downside. The upside is that China's economy soared because the changes lifted a burden.

The social security system has improved a lot since the 1990s, and the services sector has grown so that it offers more jobs. This means the government should find its task easier this time around. Governments at all levels can and also should help cover the cost of retraining laid-off workers so they can take up new employment, helping society remain stable.

If excess capacity is not cut, supply-side reform cannot succeed. The recent conference made this clear. Wuhan Iron and Steel (Group) Corp. recently said it has started improving its labor situation with a plan that includes negotiated early retirements. This may be the beginning of a new movement that trims excess steel manufacturing capacity. Hopefully, it doesn't come too late.