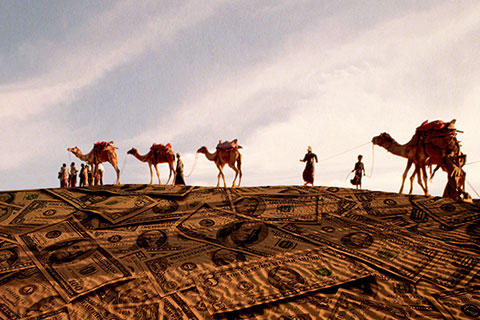 (Beijing) – From Pakistan's biggest city to the border with Vietnam, Chinese companies are busy cementing major trade and business relations to build a foundation for the government's Silk Road Economic Belt and the 21st Century Maritime Silk Road initiatives.

Solidly behind these companies is a wall of banks, including major policy and commercial lenders, eager to extend credit and offer cheap financing.

Chinese banks have considered the dangers of doing business in less-developed countries and concluded that the benefits of these "belt and road" projects far outweigh the risks.

Among the latest deals, the Export-Import Bank of China (Exim), a policy bank, recently agreed to finance a US$ 2.89 billion, 390 kilometer highway linking Pakistan's largest city, Karachi, and second-largest city, Lahore. It also agreed to back a US$ 1.3 billion highway upgrade to improve travel between the cities of Havelian and Thakot.

The deals were signed on December 22 in the Pakistani capital Islamabad between state-owned contractor China State Construction Engineering Corp. and the National Highways of Pakistan agency.

Together, these contracts comprise the largest transportation-related infrastructure package so far under the US$ 46 billion China-Pakistan Economic Corridor initiative signed by President Xi Jinping and Pakistani Prime Minister Nawaz Sharif in May 2013. Ultimately, the plan calls for linking the Arabian Sea port of Gwadar in southwestern Pakistan to western China.

Meanwhile, Chinese companies are building a 105,000 square meter, 560 million yuan logistics center near the China-Vietnam border in the southern Guangxi region. The center has been designed to support trade between China and countries in the Association of Southeast Asian Nations bloc.

Another "belt and road" initiative is taking root in China's far west, near the border with Kazakhstan. Through a special economic cooperation zone in the border city of Yili, companies have been receiving special financing aimed at encouraging investment and trade projects.

None of these projects would be going far without the blessings of bankers. The policy lender China Development Bank (CDB) is providing 350 million yuan in financing to cover some of the Guangxi project's costs. For the Zhengzhou airport project, the bank issued 17.6 billion yuan worth of loans and set aside another 20 billion yuan for future credit. Commercial banks, such as Pingan Bank, have also helped finance the airport project.

Banks are enthusiastic about supporting Chinese companies that embrace the "belt and road" initiatives, said Zhang Xuesong, deputy director of Exim Bank's Sichuan branch. Support has thus been generous for Chinese companies working on Pakistani infrastructure, which is a key component of the campaign, said Zhang Yu, deputy director of the banking regulator in the Xinjiang region.

Historically, China has imported Middle Eastern oil and commodities almost entirely through the South China Sea, said Deng Jianghui, an official working for the Kashgar Special Economic Zone near the China-Pakistan border. But importing commodities "over land from Pakistan through the port in Gwadar is 90 percent shorter."

Many international trade experts have warned about risks associated with "belt and road" projects. They often point to challenging geographic conditions, such as the mountains of Central Asia, political uncertainties in target countries, and a variety of security issues as potential obstacles. Other experts have expressed concerns about the wisdom of pushing banks to finance the projects amid China's economic slowdown.

"It is very important for banks to control risks and avoid bad loans," said a state bank executive who asked not to be named. "It's a major task for companies, the government and banks to find ways to ensure that the projects succeed and yield sound investment returns."

"There are considerable risks in countries along the route of the "belt and road" initiatives," the executive continued. "But projects must be pushed forward."

Other risks for companies that take the plunge are attached to the currency exchange environment, particularly in view of the weakening of the yuan against the U.S. dollar.

"The yuan's depreciation trend is becoming clearer," said Chang Hao, deputy director of overseas operations at the Zhengzhou Yutong Bus Co., which has been participating in the Silk Road campaign by selling buses in Pakistan, Indonesia, Tajikistan and Kazakhstan. Exchange-rate fluctuations will likely erode company profits, he said.

One firm that saw operating costs rise 2 percent due to exchange rate fluctuations is now seeing "profits offset by exchange rate losses," said a source at the company who declined to be named.

The yuan has been especially volatile since August, said a source at the Henan branch of the Bank of China, pushing currency exchange costs higher for companies that import goods and firms with foreign debts.

This has prompted Chinese companies and banks to try new ways to cope with exchange rate volatility.

Song Tao, the deputy director of the Xinjiang branch of the Bank of China, said banks usually encourage companies to use yuan for cross-border settlements if possible. China's currency is freely accepted by companies in countries covered by more than two-dozen swap agreements between the People's Bank of China and other central banks.

Firms doing business in countries where the yuan is not accepted can control risks through currency hedging. Meanwhile, most Chinese companies with "belt and road" projects are eagerly awaiting the day when the yuan becomes a truly global currency.

"The only fundamental way to resolve exchange rate risks is to push forward the internationalization of the yuan," said an Exim Bank executive who wanted to remain anonymous.

The risks, rewards and bank support going hand-in-hand with the Silk Road plans are factors for Chinese manufacturers that never leave home as well as those with infrastructure deals abroad. One example is Yutong Bus, which Chang said is cooperating bankers at CDB.

To support Yutong's sales abroad, CDB has extended loans worth a combined 10 billion yuan to its customers in four countries. The bank helped the company boost sales in Central Asia even while its orders in Eastern Europe and the Middle East have declined, said sources close to the company.

Companies that make farm machinery and other agriculture-related businesses have also expanded into overseas markets since 2014 thanks to bank support for "belt and road" business, said the Bank of China's Song. In 2015, for example, CDB's Henan branch loaned 200 million yuan to Henan Huangfanqu Industrial Group to support its agriculture-related investments in Tajikistan.

"Agricultural companies used to have a hard time accessing financing because they lacked quality collateral, such as commercial land," said a source at CDB's Henan branch. But the bank agreed to extend financing after accepting revenue from Huangfanqu's land leasing business as collateral.

Also counting on the "belt and road" initiatives are companies in sectors of the economy now besieged by overcapacity problems. These include makers of steel, cement and heavy machinery.

Banks are, once again, rising to the occasion. An executive at a private company said banks have been happy to support the firm's overseas projects even though business at home has suffered in the face of the sector's overcapacity.

An employee of an Industrial and Commercial Bank of China branch in Sichuan Province said the bank has been lending to companies engaged in the power plant equipment and steel manufacturing sectors with "belt and road" projects.

People at the Bank of China said loan schemes have been designed to support companies that transfer some of their manufacturing capacity abroad, with the goal of addressing domestic overcapacity problems. These include projects that "move steel refining and cement production capacities overseas," one person said. This overseas production capacity can then be channeled "to support local construction projects" by Chinese companies, the source said.

But factory transfers are easier said than done, especially if a manufacturer has the potential to damage the environment, bank executives said.

Moreover, transferring capacity overseas is not always right for the target country. An executive at China Export & Credit Insurance Corp. (Sinosure), the government's policy-oriented credit insurance agency, said companies on the "belt and road" bandwagon would do well to pay attention to what governments and customers in other nations are saying about local demand for industrial and business projects.