To Curb Graft in Guangzhou, It Takes a Village 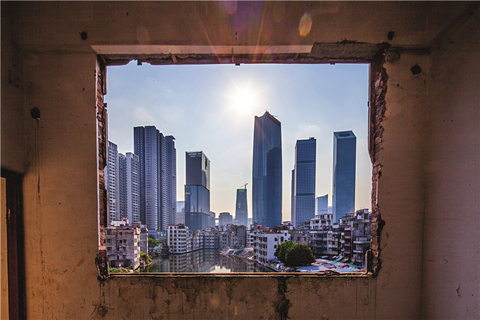 (Guangzhou) – In the shadow of high-rise offices and luxurious residential skyscrapers in downtown Guangzhou's central business district is a neighborhood of shabby apartment buildings and narrow alleys that predates China's roaring urbanization drive.

The neighborhood is what's left of an old village called Xian, pop. 4,000. Ringed by skyscrapers, its dilapidated buildings cover about 200,000 square meters in the heart of the busy southern metropolis.

Local officials have frequently tried to tear down what remains of Xian, which many see as the last "urban village" in Guangzhou. Most buildings in what used to be a community of peasants have already been razed and replaced by newer, taller buildings.

But a group of defiant villagers has stood in the way of a final demolition project, not out of love for run-down buildings but out of contempt for the officials and property developers they say have been cutting dirty deals and unfairly taking their land.

Since 2008 Xian villagers have worked hard to hold back demolition crews while at the same time petitioning for justice. That justice eventually came in the form of arrests and convictions of about a dozen officials on corruption charges. Villagers also got what they wanted most: a fair deal for their land.

Communist Party officials started responding to the villagers' pleas in July 2013. Initially, seven village officials were probed for wrongdoing. The following December, central government investigators targeted Cao Jianliao, who was then serving as deputy mayor of Guangzhou, for his role in Xian property deals. The party expelled Cao in mid-2014.

Cao's case moved slowly through the justice system until last January, when he was charged in a Shenzhen court with accepting bribes from developers worth more than 76 million yuan in exchange for favors linked to land deals.

Cao's trial came 18 months after courts started processing cases against several lower-level officials. After being convicted on corruption charges, the seven Xian officials were sentenced to between 17 months and four years in prison.

And He Jixiong, general manager of the local government's Shahe (County) Economic Development Co. who worked under Cao, faces up to 15 years in prison for accepting 27 million yuan in bribes. In recent years, He was one of Cao's close associates and a subordinate. Their relationship dates back several decades, as He succeeded Cao in the post of Shahe County's head in 1996.

Since the arrests and convictions of officials began, Xian's remaining residents have agreed to let demolition crews level what remains of their village to make way for more skyscrapers. In March 2015, China Poly Group started building new apartments just for villagers on half of the land. The other half will be used for a luxury hotel and office building that are likely to generate from rents some 55 million yuan a year to be divided among villagers.

Developers started chipping away at Xian in the 1990s, after Guangzhou's government approved the construction of new office buildings in what became known as the Pearl River New District business area. Eventually, some 6.6 square kilometers of farms, homes and small factories were expropriated in Shahe County, which includes Xian.

Cao found himself at ground zero for property development. He had been working for the Shahe County government since the late 1970s and was named its governor in 1985. In the 1980s, he pushed for industrial development in the county and initiated a 240 million yuan plan to build factories.

By 1990, the county was home to more than 200 companies, including 17 owned by the county government. That made it one of the wealthiest counties in China. Things changed in 1992 when the Guangzhou government released its plan to seize land in the county, including in Xian, for the Pearl River New District project.

In 1994, Cao was appointed to the party's standing committee for Guangzhou's Tianhe District, an area that encompasses Shahe and Xian. Cao was assigned to oversee the projects in the Pearl River New District. And in 1996, he was promoted to the position of Tianhe deputy governor.

Through the expropriation process, the Shahe government got permission to develop about 18 percent of the land targeted for the business district. The county's share had been collectively owned by local villagers before it was put under the control of Shahe (County) Economic Development.

Public complaints started popping up shortly after the development project got underway. Many people said they smelled corruption.

Some villagers accused their leaders of lying about demographics in order to qualify for expropriation compensation from the Guangzhou government. They said that during a round of land seizures that ended in 1994, the heads of Xian and neighboring Liede Village exaggerated the size of the population to get a bonus of more than 10 million yuan from the Guangzhou government. Villagers said they never shared any of that money with anyone else.

The whistleblowers said it seemed that at least some of the bonus cash was spent on overseas vacations for Cao and other officials. Prosecutors say Cao's first dirty deal was completed in 1992, the year he helped a Hong Kong businessman named Fan Jishun obtain land development rights in exchange for 2 million yuan.

Run If You Can

Public attention of the issue rose a notch in late 2012 when Li Rongfang, the party head in Liede Village, reportedly fled to Canada. The next year, Guangdong's graft fighter started investigating land deals in Xian and Liede. That led to detentions for the seven Xian officials, although Xian's party head, Lu Huigeng, slipped away by fleeing overseas, state media reported.

Perhaps not coincidentally, around that time Cao started encouraging his relatives and business partners to emigrate from China, according to a person with knowledge of the matter who asked not to be named. These included Sun Meng, chairman of GT Land, and KWG Property Holdings Chairman Kong Jianmin.

The media has also reported that Cao's son, Cao Jianrong, once held more than 10 million yuan worth of shares in Hong Kong-listed KWG.

Cao also made millions of yuan through land deals with a company controlled by the family of Tan Liqun, a former official in Guangzhou's land resources administration. Cao recently told prosecutors he offered the land to a company Tan's family owned to reward her for helping relocate and compensate villagers displaced by land expropriation.

Tan told a court that in 1996 Cao offered her development rights to one of nine plots that were then available. A year later, the Tan family's Julian Property Development Co. bought the rights to 6,238 square meters from the Shahe Economic Development Co. for 300,000 yuan.

Investigators detained Tan on graft charges in April 2014, and her case went to trial in June last year. A verdict is pending.

GT's Su, a former wholesale market operator, is also close to Cao. The two men first met in 1985, people familiar with the pair said, and with Cao's guidance Su cooperated with Tianhe-area village officials for land development deals. GT profited by selling the plots after property prices surged in 2003.

People with knowledge of the matter said that Su left China after investigators moved in on Cao, and that he is living overseas. In 2010, Forbes magazine ranked Su No. 52 on its list of China's wealthiest individuals with 17.8 billion yuan in personal assets. Guangzhou media has reported that Su paid Cao tens of millions of yuan.

According to property transaction documents viewed by Caixin, developers who dealt with Cao, including GT and KWG, followed similar routines that allowed them to cooperate with village authorities in charge of land development.

For example, under a typical policy adopted by villages, a village government must own 30 percent of any development built on collectively owned land that were used for commercial development for the Pearl River New District. To follow that policy but keep full control of a development, a developer may build a new retail area in a nearby neighborhood and give it to the village in exchange for the 30 percent stake. The village can then make money by renting out retail space to developers.

Xian villagers said that developers cheated them as well. Developers are paying as little as 11 yuan per square meter per month for a 350,000 square meter retail area. Officials in Guangzhou have asked developers and villagers to renegotiate these contracts.