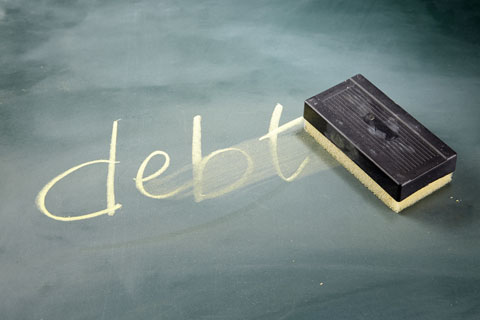 Many commercial borrowers who defaulted on loans in recent months have been accused by their creditors of deliberately dodging debt obligations.

Such accusations have certainly strained relations between the nation's lenders and borrowers, and could scare off investors with interest in the bond market. Risks linked to such toxic debt might not lead to anything close to a financial crisis, but we cannot afford to let this problem undermine faith in the financial system.

As the Chinese economy slows, businesses already bedeviled by overcapacity issues and excess inventory might turn to opaque restructuring schemes or dubious mergers and acquisitions to evade their debt liabilities. To protect the financial system, we cannot let this malaise go unchecked.

Thus, regulators must act now and quickly before the problem gets out of control. Key to such an undertaking will be to making sure authorities overseeing state-owned assets and local governments do not meddle in debt restructuring projects.

Debt dodging is nothing new in China. State-run companies failed to repay trillions of yuan worth of debts at the turn of the century. This debt was amassed largely due to reckless borrowing.

After the central bank moved to ease monetary policy in 2011, many private businesses in the steel and coal industries, particularly those in the eastern provinces of Zhejiang and Fujian, defaulted en masse. But the impact of these defaults on the nation's economy was limited because each bad debt was relatively small.

Today, though, the level of toxic debt is particularly alarming. State-owned companies controlled by both the central and local governments are major culprits. The amount of defaults involving these state companies is outrageous – as much as hundreds of billion yuan in some cases.

Companies have been employing sophisticated tactics and in some cases scams to sidestep their debt obligations. For instance, some have transferred assets to parent companies in order to fast track bankruptcy.

Toxic debts linked to state companies have a far-reaching impact both on the banking system and the bond market. Lenders eyeing the situation would turn far more prudent and think twice before granting new loans in the future. Meanwhile, bond market investors would be far less interested in state-run companies.

The rising level of malicious debt-dodgers has jolted China's highest leaders and financial regulators. The State Council, the country's cabinet, announced at a meeting on January 27 that authorities would give banks more support in their fight against rogue borrowers. The goal would be to reduce bad debts levels at banks.

Four central government agencies including the central bank and China Banking Regulatory Commission in late April issued a document aimed at addressing the bad debt issues plaguing many debt-ridden steel and coal companies. The agencies have pledged to work more closely in coordinating information and law enforcement to deter borrowers from flouting their obligations.

In fact, though, regulators have been working for years on ways to facilitate the fight against rogue debtors. The China Banking Association wrote guidelines for a tracking system in 2006 and updated these guidelines in 2013. Under the guidelines, those blacklisted for deliberately skirting debt obligations are not allowed to take out new loans.

The association is now working on a new regulation aimed at bolstering the fight against malicious defaults. On top of that, the Supreme People's Court has been publishing a list of rogue borrowers on a regular basis since October 2013. This list is shared with a central bank department that oversees credit information.

These measures have worked well as authorities have not only sought to identify the fraudulent tactics that some borrowers use to escape obligations, but also devise methods for deterrence. Nevertheless, these steps can only go so far. What's really needed is to identify the core problem – and take action.

A closer look at the latest wave of defaults shows that local government authorities are often part of the problem. They often overstep boundaries and get involved in questions over how to resolve sour loans.

When a default occurs, regional authorities usually respond by setting up a creditors' committee together with regulators in charge of overseeing state assets. However, many local governments have shown little interest in using these committees as venues to protect creditor interests.

Instead, they have often sought to prevent banks and other creditors from filing lawsuits against or cutting off credit to defaulters. For example, local governments have used their power to control business licenses to prod banks.

Local authorities can be blinded by the idea that they should protect local employers and companies. They may block proper lawsuits or debt restructuring procedures in order to protect local businesses. And because of protectionism, many lenders have been unable to secure debt repayments or compensation even after winning court battles.

Regional governments might justify their maneuvers by saying they want to protect jobs, the local economy and social stability. But by condoning borrowers who dodge obligations, they undermine the entire financial system and the nation's critically important credit system.

We must bear in mind that a market economy relies on the public's faith in the credit system. Disregarding this truth will cost us dearly, as it can drive up borrowing costs and make credit more difficult to issue and obtain. Local economies would suffer in the long run.

It's time to rein in malicious defaulters in order to keep the economy strong. Bank regulators, courts, police and tax authorities must work together to fight the malaise.

Meanwhile, local authorities must show restraint. They have to recognize the clear line between what they can and should do when a local business faces debt woes. They should let the market decide how to resolve bad debt. Borrowers, banks and bond investors can work out debt restructuring plans on the playing field of an open market. And if a negotiation fails, a dispute can be taken to a court for a speedy ruling that minimizes losses.

Public faith in the credit system is as important to the economy as a green ecosystem is to sustainable development. It's equally important for a local economy. To that end, local government officials must never forget that we're better off when the market is allowed to decide the fate of an indebted business.