By Han Yi and Li Rongde 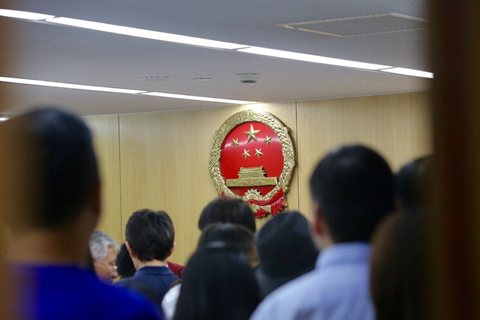 (Shanghai) – Rumors that further home-purchase restrictions will soon be imposed in Shanghai have couples flocking to marriage registration offices to file for divorce in an effort to skirt the alleged new rules.

The online rumors include one that Shanghai officials are planning home-buying restrictions on divorcees to thwart a property bubble.

Although the city government has denied it is planning any changes to the city's home-purchasing rules, that hasn't stopped the rush of couples seeking to separate. Long lines of people were seen inside the marriage registration center in the Xuhui District in downtown Shanghai shortly after the lunch break on Aug. 30.

Several people in the line interviewed by Caixin said they were filing for divorce so that they could still be eligible to buy a new home once the rumored policy is in place.

At least 108 couples filed for divorce in Jingan District on Aug. 30, compared with fewer than 10 applications per day in the past, according to a government employee who asked not to be named.

Home purchase rules in China usually apply to a family unit. By filing for a divorce, people are no longer subjected to such rules because a divorced person is considered in another family.

Shanghai already has some of the strictest restrictions on homebuyers. Under rules released by city authorities late in March, residents who are not registered with a Shanghai hukou— a residence permit — have to show they have had a pension and medical insurance plan in the city for at least the past five years before they can buy a home there.

Those who already have one home in the city have to come up with a down payment equivalent to 50 percent of the price of the home they intend to buy — up from 40 percent.

Rumors started to circulate via social media platforms, including WeChat, since Aug. 27 saying that city authorities would further tighten control of the housing market. One rumor declares that those who file for divorce after Sept. 1 will have to wait one year to be eligible to purchase a new home.

The rumors have sent home sales skyrocketing. Statistics from the research unit of real estate chain Liangjian in Shanghai show that home sales nearly doubled in the week from Aug. 22-28 to 555,700 square meters in the city, close to the sales recorded in March when the earlier curbs were put in place.

The number of units sold reached 1,700 per day, some 300 to 400 more than the daily sales before the rumor started.

The Shanghai Housing and Urban-Rural Construction Commission, which oversees the city's housing market, publicly denied the rumors on Aug. 29, saying regulators remain committed to the policy released in March. However homebuyers have simply ignored the reassurance, and 2,012 homes were sold the following day.

One Shanghai real estate agent who asked not to be named told Caixin that they have been overwhelmed with visits from homebuyers with inquiries or to wrap up contracts over the past several days.

One homebuyer said that the government's move to dismiss the rumors might just prove the opposite—that a change to the home purchase policy is actually on the way. Another Shanghai resident told Caixin that he prefers to buy a home sooner than later regardless of whether there will be a new curb because he believes housing prices will continue to climb.