By Jia Huajie and Li Rongde 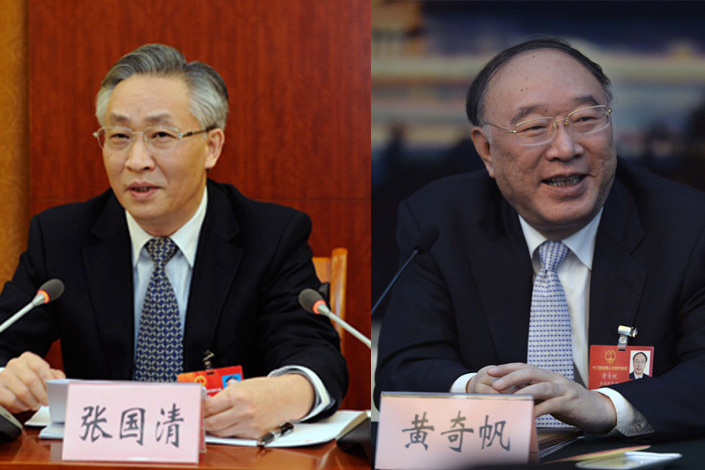 From left: Zhang Guoqing and his predecessor Huang Qifan

(Beijing) — Zhang Guoqing, deputy party chief of Chongqing, has been named acting mayor of the southwestern city, the local legislature said on Friday.

Huang Qifan, the mayor of Chongqing for nearly seven years, has stepped down. It remains unclear whether the 64-year-old veteran official, who has been acclaimed for helping building Chongqing into China’s model city in terms of economic development, will be assigned a new job.

Zhang, 52, holds a doctoral degree in quantitative economics from Tsinghua University. From 1987 to 2013, he worked at China North Industries Corp. (NORINCO), a company dealing with military trade. In 2008, he became president of China North Industries Group Corp. while doubling as chairman of NORINCO. He was appointed vice party chief of Chongqing in April 2013.

Huang, meanwhile, steered the southwestern municipality into double-digit growth for years, even as China’s economic growth overall has slowed.

The city’s economy grew 10.9% in the first three quarters of the year, according to the city’s statistics bureau, far above the national average of 6.7% for the same period.

Under Huang’s leadership, Chongqing made electronics manufacturing and automaking the two pillars of the local economy, offsetting a slump in steelmaking and coal production — which once accounted for nearly half the local economy — due to overcapacity.

As a major hub for IT equipment, Chongqing produces one in three laptops sold worldwide.

Known among observers for his flair for economic and financial management, Huang pioneered reform in many areas, but particularly to Chongqing’s household registration system, or hukou, and the city’s rural land policy.

Chongqing was one of the first regions to abolish a distinction between those registered as rural residents and those with an urban hukou — a move to encourage rural migrants to settle in urban areas.

Huang’s administration also introduced a trial land ticket policy, which allowed farmers to trade their land use rights in return for cash to resettle in cities, to free up extra land for large-scale farming or development. The five-year program successfully saw a total of 24,700 acres of rural land turned over for industrial use or commercial development.

“The land ticket system improved farmers' incomes and offered financial support to migrant workers who left their rural homes,” Huang said during an interview with Caixin in September 2015.

“It also better protects farmland and reduces the conflict between urban demand and rural land supply.”

Over the past few years, Chongqing has not seen a decline in its amount of farmland, Huang said. “I am confident that by 2020, when Chongqing's urbanization rate reaches 65%, our farmland will even see an increase,” he said.

Huang started his career as a factory worker during the Cultural Revolution (1966-76). He later became an engineer at a local electronics manufacturer and then became the director of a now-defunct Shanghai factory before he was transferred to a city government agency overseeing economic planning in the 1980s.

His years involved in the development of Shanghai’s Pudong New District earned him a promotion to a deputy chief of staff of the Shanghai government in 1995.

His biggest break came in 2001 when he was promoted to vice mayor of Chongqing, overseeing state assets, industrial manufacturing, education and finance. He was appointed mayor of the city in 2010, the city’s fourth mayor since Chongqing was elevated to a provincial-level municipality in 1997.

Huang was able to retain his job after Bo was sentenced to life imprisonment in September 2013 for bribery, embezzlement and abuse of power.