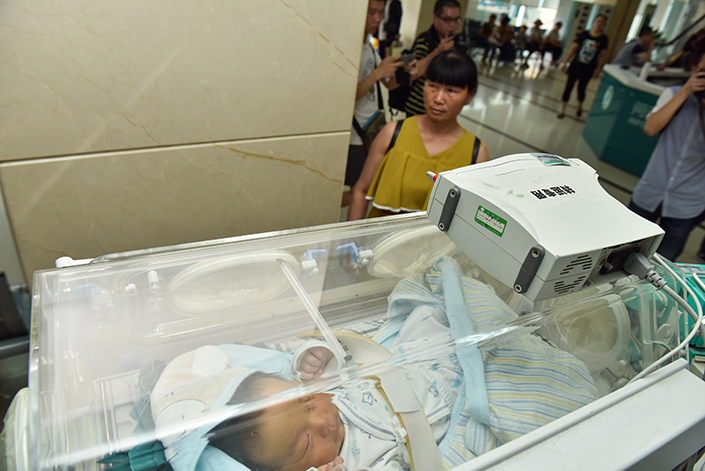 A 1-month-old boy, Chunchun, gets treated on Sunday at West China Hospital of Sichuan University in Chengdu, Sichuan province. The boy's timely cries alerted his parents to the approaching landslide early Saturday morning in the village of Xinmo in Sichuan. Photo: Visual China

(Mao county, Sichuan) — A grim search continues for 93 people still missing from a landslide that flattened a village in southwestern China — but one family was apparently spared because of a crying baby.

Meanwhile, angry villagers have demanded that local officials be held accountable for failing to heed their repeated warnings about a cave-in years ago on top of the mountain where the landslide occurred early Saturday.

The landslide, on Fugui Mountain in Sichuan province’s Mao county, or Maoxian, wiped out 46 homes, or about half of those in Xinmo village, the local government said.

As of Monday evening, only three people — a couple and their infant son — were known to have survived the landslide.

The wailing 1-month-old boy, named “Chunchun,” woke up his parents early Saturday morning in the village of Xinmo, alerting them to the roaring sound of the approaching landslide, according to the West China City Daily, a newspaper in the provincial capital of Chengdu.

The parents rushed outside with their baby and were swept away by the mudslide, the newspaper reported Sunday. The three were later found unconscious by farmers from another village, who took them to a hospital.

The couple and their child were being treated at a hospital in Chengdu, the newspaper said.

Rescuers had recovered 10 bodies by Monday evening, county authorities said. Over 2,500 firefighters, paramilitary officers and volunteers have been working round-the-clock since Friday to find any trace of survivors.

Nearly 8 million cubic meters (282 million cubic feet) of debris — or over 4,000 times the volume of a standard swimming pool — flattened farmhouses at the foot of the mountains after days of incessant rain last week, the county government said.

Investigators also said the impact of previous earthquakes, including the massive quake in May 2008, may have caused the landslide. The 7.9-magnitude quake in 2008 killed nearly 90,000 people, including nearly 20,000 in Maoxian.

However, some villagers see the landslide as a tragedy that could have been avoided. Yang Daixiao, a villager living in a government shelter after fleeing the mountain, said Monday that local residents had discovered a cave-in on top of the mountain a year or two after the 2008 earthquake.

The cave-in, which was dozens of meters wide and up to 300 meters (984 feet) long, caused an area of soil and the rock on top of the mountain to sink, according to Yang, who said he personally surveyed areas of the mountain last year.

When it rains, the depression left by the cave-in turns into a reservoir on top of the mountain, Yang told Caixin.

Local villagers alerted local authorities about the hazard posed by the cave-in, Yang said. “However, the authority didn’t send out any warnings or make any plans to relocated the villagers living at the foot of the mountain,” he said.

“We could have prevented the losses if we had left the area, or a tunnel had been dug to divert the water out of the depression,” a local farmer told Caixin.

Maoxian is administered by Aba prefecture, an area populated with people of the Tibetan and Qiang minority groups.

Neither Aba prefecture nor the local branch of the Sichuan Land Resources Bureau responded to inquiries from Caixin on Monday.