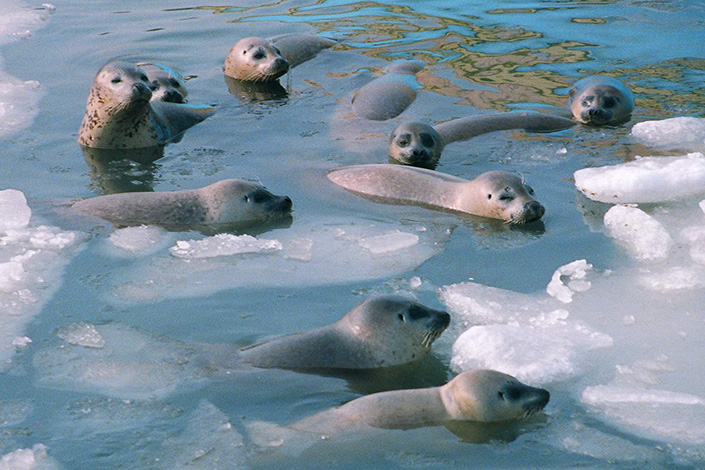 A court has commuted the prison sentence of Tian Jiguang, an environmentalist known for his campaigns to protect spotted seals in northern China, from 12 years to four and a half years. Above, seals swim among the melting ice in Dalian, Liaoning province, in January 2016. Photo: Visual China

(Beijing) — Well-known environmentalist Tian Jiguang, sentenced to 12 years in prison for blackmailing an oil company and embezzling funds, had his sentence commuted to four and a half years at a retrial last week.

The case highlights issues of transparency and funding challenges facing advocacy groups in the country.

Tian, 54, was a veteran conservationist known for his campaigns to protect spotted seals in northern China. His detention in November 2013 — for allegedly taking 52,800 yuan ($7,740) from a local oil company — sent shockwaves through the country’s environmental groups because it came at a time when authorities were increasing scrutiny on organizations receiving funds from abroad.

Tian headed the Association of Volunteers for the Protection of Spotted Seals in Panjin city in Liaoning Province. Spotted seals aren’t an endangered species worldwide, but their population in Liaoning fell from around 8,000 in the 1930s to around 2,000 in the ‘80s, according to environmental advocacy group China Dialogue. Today, there are around 1,000 spotted seals in the province, a significant increase from a low of just a few hundred.

According to the verdict from his first trial in September 2014 at the Dawa County People’s Court in Liaoning, Tian was sentenced to 12 years in prison for a string of charges. They included “blackmail linked to taking 52,800 yuan from a subsidiary of state-owned China National Petroleum Corp. (CNPC), embezzling 270,000 yuan from his organization in seven instances and misappropriating donations worth 100,000 yuan,” according to court documents.

In contrast, Li Chuncheng, a former deputy party secretary from Sichuan province received a 13-year prison term after he was convicted of taking nearly 40 million yuan in bribes in October 2015.

Tian insisted he was framed and appealed. Seven environmentalists who knew Tian personally told The Southern Weekly in 2015 that they believed he was jailed because his work “threatened groups with vested interests,” but didn’t offer any evidence to support this claim.

After losing a retrial at the same county court in August 2015 and an appeal three months later, Tian’s case was again taken up by the Shuangtaizi District People’s court this year.

The court reduced his sentence to four and a half years after he was found guilty of embezzling more than 160,000 yuan over four occasions, less than the sum in first trial. The court, however, upheld the charge that Tian had “extorted money” from the oil company.

The circumstances leading up to his detention in 2013 are murky.

According to his trial documents, Tian had posted a story on his microblog in June 2013 — a month before he was detained — saying pollution from an oil rig owned by Liaohe Oilfield, a subsidiary of CNPC, was threatening the natural habitat of seals just 1 kilometer away.

During a later meeting with representatives from the CNPC subsidiary, he agreed to delete the widely circulated article after the company promised to make a 100,000 yuan donation to his environmental group, according to court documents.

But Tian’s organization was unable to provide the oil company with the required receipt for the donation, making the transfer impossible, the county court said.

Instead, CNPC had given 52,800 yuan in cash to Tian, and the activist had used the money to buy a Cannon camera, court papers showed. Tian had, however, provided the required receipt to the company as proof of payment, according to court filings.

Unlike government-backed charity groups, many nongovernmental organizations (NGOs) in China advocating for human rights, access to health care and environmental protection, have difficulty raising funds through donors at home and rely on overseas funding for survival.

In recent years, however, the government has imposed stricter reporting requirements on NGOs receiving foreign donations. The southern industrial hub of Guangzhou was among the first cities in China to require such charities to report to regulators 15 days before they receive any funds from foreign sources, according to a regulation released in November 2014.