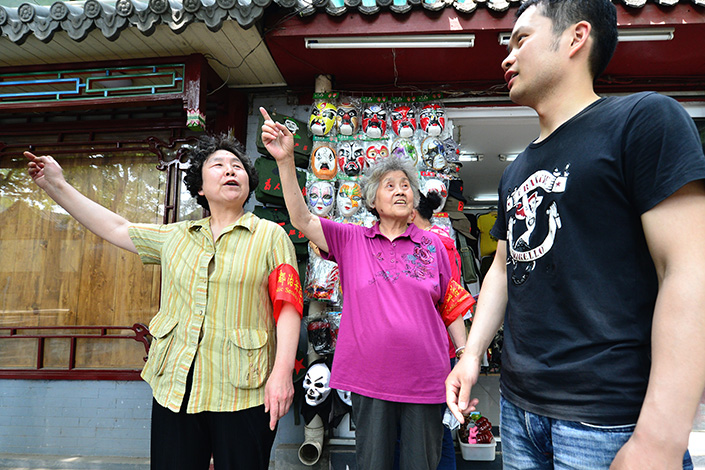 A district police bureau in Beijing plans to hire nearly 2,500 people to help check whether residents from outside the city have the proper registration documents. The move is the latest in a series of measures aimed at easing the flow of migrants to China’s congested capital. Above, two volunteers in red armbands help police maintain public order in Beijing in May 2014. Photo: Visual China

(Beijing) — Police in one of the most densely populated districts in downtown Beijing are recruiting thousands of assistants to keep its migrant population in check.

In a notice released late on Monday, the Chaoyang District Police Bureau said it was “hiring 2,464 administrators” to assist officers to check whether residents from outside Beijing had the proper registration documents.

Under the country’s strict household registration rules, any Chinese citizen living outside his or her hometown for more than six months must obtain a residence permit from police.

The new recruits — all Beijing natives aged 18 to 45 — will also help police carry out door-to-door inspections of homes rented by migrant families. The teams will be looking for “potential safety and fire hazards,” the notice said.

The move is the latest in a string of measures aimed at easing the flow of migrants to China’s congested capital. It has also become a sore subject that has sparked a heated debate on Chinese social media.

One internet user commenting on the official microblog of Chaoyang police said: “This is to tell those without a Beijing hukou (household registration) and a home in Beijing to get out.”

“There will be only those with royal blood, their relatives and the rich left in Beijing after the poor are forced out,” another commentator said.

Chaoyang is home to both young office workers and farmers-turned-street vendors and restaurant owners.

The district plans to cut its population by 142,000 people to 3.71 million by the end of 2017, according to a local government plan. It’s part of a broader plan announced by the Beijing municipal government to cap the city’s population at 23 million people by end 2020. This includes the floating migrant population, with its many “undocumented” workers.

In 2016, Chaoyang’s migrant population declined 5% from the previous year to 1.75 million. The area’s total population also dipped by 2.5% year-on-year to 3.86 million, data from the district government showed.

Since 2014, authorities have closed hundreds of retail and wholesale markets and shops that mostly employed rural laborers and schools for children from migrant families.

In a another recent development, authorities in Qiuxian village in the rural district of Daxing said they plan to charge 2,000 yuan ($295) per month to residents without a Beijing hukou from next month in a bid to have “zero migrants” in the area.

Migrants who operate roadside shops and restaurants in the village will be ordered to pay another 5,000 yuan per venue each year to cover costs linked to public sanitation, security, water and electricity, Qiuxian’s village committee said.

But experts said the charges were “illegal” because residents, including migrants, were already paying taxes or utility fees for those services.