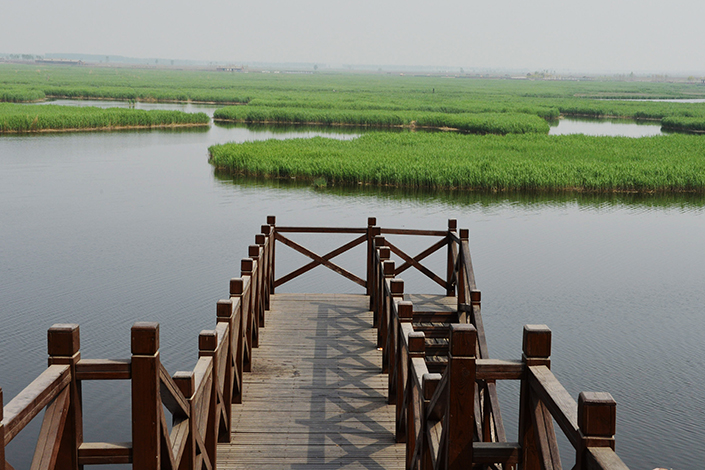 Tianjin city government officials have drawn criticism from the central Chinese government over the worsening of air and water pollution there. Above, the Qilihai Nature Reserve in Tianijn is seen in April 2014. Photo: Visual China

(Beijing) — Inspectors from the Ministry of Environmental Protection (MEP) have censured authorities in the northern port city of Tianjin for failing to tackle the city’s air- and water-pollution problems.

An MEP inspection team, in a meeting with Tianjin city government officials on Friday, criticized local authorities over the deterioration of the air and water quality in the city, located about 75 kilometers southeast of Beijing.

Tianjin has been at the center of China’s fight against air and water pollution because the area composed of Beijing, Tianjin and the northern province of Hebei, which surrounds the two provincial-level municipalities, is the most polluted area of the country, containing six of China’s most polluted cities.

“Every time leaders in Tianjin talk about tackling poor air, they usually blame the weather,” the inspection team said. “In fact, they lack a sense of responsibility.”

Levels of all five major pollutants in the city’s air, including the two cancer-causing types of particulate matter — PM2.5 and PM10 — rose in the first quarter of the year from the same period in 2016, inspectors said in a statement released at the end of the meeting.

The average concentration of PM2.5 — fine particulate matter with a diameter of 2.5 micrometers or less and which is especially hazardous to human health — increased more than a quarter over the period to 88 micrograms per cubic meter of air, according to official statistics. According to China’s national standards, a concentration of PM2.5 above 35 micrograms per cubic meter is unsafe.

The inspectors based their findings on a monthlong inspection that took place in April and May.

Inspectors blamed the jump in pollution on government agencies in Tianjin that have gone easy on curbing pollution from steel plants and motor vehicles, as well as the burning of coal in the city.

Water pollution was also grave. Only 15% of Tianjin’s waterways monitored by the government are suitable as sources for drinking water, the inspectors said in the statement. In China, the average figure is 40%.

The inspectors found that about 61 million tons of untreated sewage from downtown Tianjin gets discharged into local waterways each year.

Because the air and water pollution in China has grown worse, a leading group under the ruling Communist Party overseeing reform introduced an inspection mechanism for environmental protection in 2015.

Since last year, inspection teams have been sent nationwide to uncover environmental violations and identify ways that local regulators can improve.

Inspectors do not usually have the authority penalize local government bodies that fail to do their jobs, though they can issue findings — which are required to be made public — to name and shame violating cities.

In Tianjin, the inspectors found plenty to shame. In December 2014, for example, the city government knowingly approved a plan to build a high-tech park in the city even though it encroached on 8.42 square kilometers (3.25 square miles) of a national nature reserve, according to the inspectors’ statement.

In Tianjin’s Ninghe district, authorities allowed a park for tourists to be built inside a major wetland reserve, the inspectors said.

On multiple occasions in 2015 and 2016, the respective environmental protection bureaus of the city’s Binhai and Wuqing districts deployed tanker trucks to spray water in areas around air-quality monitoring stations in an effort to imitate the way the rain can reduce the concentration of dust in the air, the inspectors said.