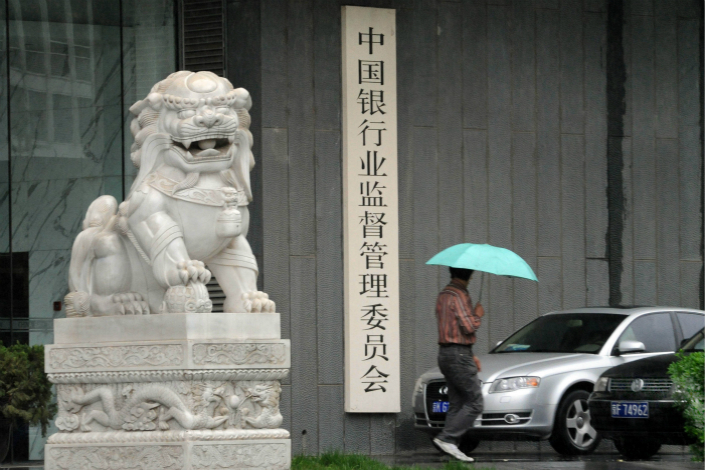 The China Banking Regulatory Commission (CBRC) and four other top central-government agencies have outlined a program in which rural borrowers will have greater access to loans. Above, the CBRC building in Beijing is seen in April 2012. Photo: Visual China

(Beijing) — China’s top financial regulators will give commercial banks backing for loans to rural borrowers who otherwise would probably be denied credit.

The new policy comes as the government seeks to alleviate poverty in low-income rural regions by supporting local farms and businesses with bank loans. But Chinese lenders have long been reluctant to extend loans to these groups because of concern about the higher credit risks and the borrowers’ lack of collateral.

Under the new policy, a loan of less than 50,000 yuan ($7,490) with a maturity of less than three years will not require collateral and can be offered at the central bank’s benchmark rate, which is usually lower than market interest rates.

Local governments will also compensate commercial banks for loan losses, although the policy directive does not offer details.

A bank that participates in a poverty-reduction lending program can have a nonperforming-loan ratio 2 percentage points above its original annual limit without affecting its standing in a regulatory review.

“Poverty-reduction loans are small in value and granted to a variety of borrowers,” said a bank executive who oversees rural banking services.

“Without sufficient credit-risk reporting, collateral and pledged assets, these loans are at higher risks (of default), … and a differential treatment of rural-based bad loans will encourage commercial banks to engage more in reducing poverty,” the executive added.

The directive also urges commercial banks to roll over rural loans if the borrowers are mired in financial difficulties.

“Since agriculture generally has a longer business cycle, output usually requires continued input,” a rural borrower said. “But currently, banks only make short-term loans to us, so we scramble for money when the loan is almost due. Sometimes we have to turn to loan sharks at crunch times.”

But the regulators also clearly restrict those loans to specific purposes. Such small loans should not be used to build houses, invest in wealth management products or purchase household items that are not for the purpose of running a business, the directive said. Also, the loans should not be pooled together and lent to local government financing vehicles, property developers and infrastructures builders.