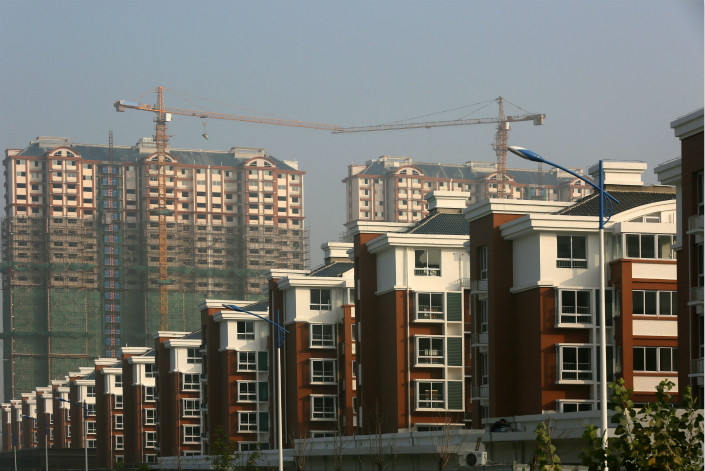 A manager of a midsize bank has told Caixin that if borrowers are found to be using consumer loans to buy homes, the bank will demand they immediately pay back the principal and interest on those loans. Above, residential housing is seen in Huaian, Jiangsu province, on Tuesday. Photo: Visual China

Homebuyers can no longer take out “consumer loans” from banks to pay for mortgages or down payments, regulators said, as the government continues with its campaign to cool the overheated property market.

Under the directives from local banking regulators, lenders in Beijing, Guangzhou, Shenzhen and other cities have over the past two months imposed stricter approval conditions for consumer loans. A manager at a midsize bank told Caixin that if borrowers are found using consumer loans to buy homes, the bank will demand they immediately pay back the principal and interest on those loans.

Commercial banks in those major cities must also conduct self-checks and report their consumer-loan data on a monthly basis, a local banking regulator told Caixin. Regulators may carry out on-site inspections if irregularities are flagged, the source added.

As part of the government’s measures to curb runaway home prices, mortgage loans’ minimum down payments and interest rates have been raised to cool demand. However, some buyers tried to circumvent those rules through borrowing short-term and less-expensive consumer loans, rendering the cooling measures less effective than they were supposed to be.

“People are still adding leverages,” an analyst from Haitong Securities wrote in a research note.

In the first seven months of this year, short-term consumer loans jumped by 750 billion yuan ($120.6 billion), with an outstanding value of 1.6 trillion yuan, said the brokerage. While most consumer loans were said to be used for buying cars, sluggish car-sales growth so far this year suggests that some of those loans were plowed into the property market, the brokerage added.

Back in 2010, the People’s Bank of China and the China Banking Regulatory Commission issued a notice prohibiting the use of consumer loans to buy homes. In the following years, the regulators have issued more directives to urge banks to abide by the rules. But due to difficulties in tracking the money once loans are approved and issued, not many commercial banks went the extra mile to ensure the rules were being followed.

According to a report released on Sept. 16 by E-House China R&D Institute, the amount of new ­“irregular” short-term consumer loans granted since March reached 370 ­billion yuan, with at least 80% believed used in the property market.