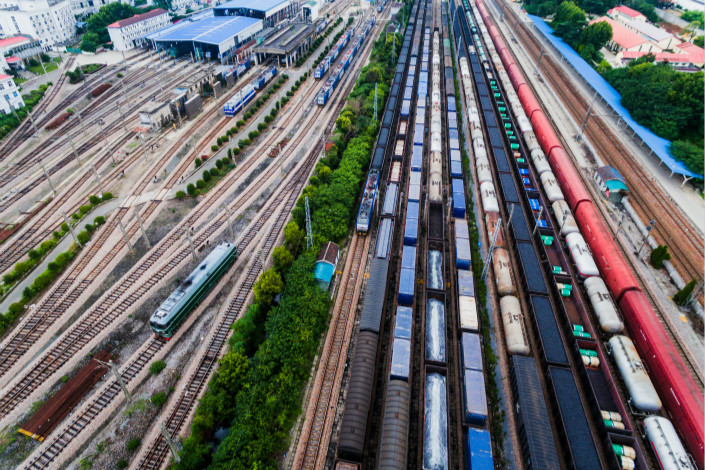 China Railway Corp., the nation's rail operator, said its cargo shipments rose 13.9% in the first three quarters of the year to 2.18 billion tons, but that number was down from 15.3% growth in the first half of the year. Above, the Nanjing East Railway Station in Nanjing, Jiangsu province, is seen on July 4. Photo: Visual China

Growth in China’s rail cargo shipments began to decelerate in the third quarter of this year, following a sharp expansion in the first half when companies stockpiled coal to avoid shortages that led to big price spikes last year.

China’s rail cargo shipments returned to a growth track this year, reversing several years of decline, as the rail operator tries to become more commercial to compete with about a dozen much younger but privately run delivery services with varying degrees of national reach.

The rail operator, China Railway Corp., found itself in a crunch last year when coal shortages in the run-up to winter left it scrambling to find enough carriages to meet demand, as prices for the commodity spiked. Buyers were purchasing earlier this year to avoid another such crunch, helping to lift cargo volumes in the first half of the 2017. But those shipments began to slow in the third quarter.

The operator reported its cargo shipments rose 13.9% in the first three quarters of the year to 2.18 billion tons, according to the operator’s latest quarterly report. But that number was down from 15.3% growth in the first half of the year, indicating that the growth rate was decelerating in the third quarter. Reflecting that, freight shipments for the month of September were up just 8.3% to 246 million tons.

The strong gains in the first half of the year led the operator to forecast it would have no difficulty meeting its annual target.

Those early gains were fueled in large part by large coal shipments during the period. In the first three quarters of the year, Daqin Railway Co. Ltd., operator of one of China’s main rail lines for coal shipping, said its shipments rose more than 33% to 322 million tons. But the growth rate was down to 26% in September, indicating people were shipping more coal earlier in the year.

The rail operator also said it is making progress on freight shipping connections between China and Europe, which have become a focus under China’s “Belt and Road” initiative, encouraging infrastructure development along the historic land-based and maritime Silk Roads. The cumulative number of trains traveling between China and Europe broke through the 5,000 barrier in the year through Sept. 7, the rail operator said.

In the same report, the operator also said that rail passenger traffic rose 9.1% in the first three quarters of the year to 2.32 billion trips. Travel on the nation’s newer high-speed rail network accounted for more than half of those, and was up 18.7% to 1.29 billion trips over the period.