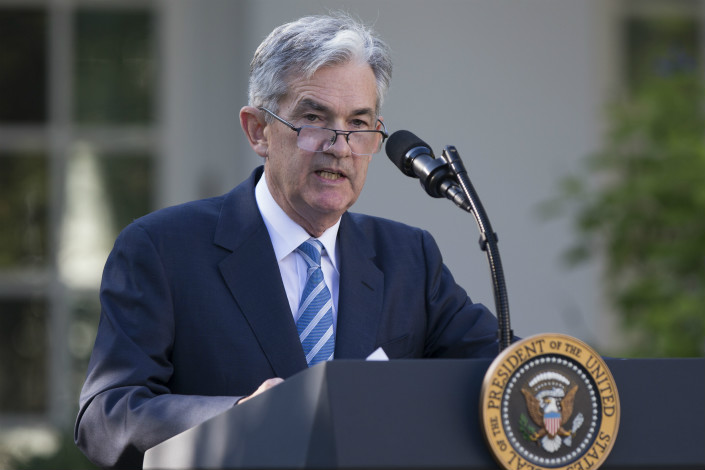 If Jerome Powell is confirmed as the new chairman of the U.S. Federal Reserve, the effect on China will be limited at most, according to sources within the People's Bank of China. Photo: IC

Within China’s central bank, there seems to be a consensus that U.S. monetary policy will see continuity in the wake of Jerome Powell’s nomination as the next chairman of the Federal Reserve.

Several sources within the People’s Bank of China (PBOC) told Caixin that they expect Powell to continue the policy of his predecessor, Janet Yellen, of gradually increasing U.S. interest rates while shrinking the central bank’s balance sheet.

Also, potentially less-stringent regulations on U.S. financial institutions, which Powell and the White House are appearing to pursue, won’t create pressure on China, which is tightening its oversight over its own sprawling financial system, the sources said.

However, Powell lacks a formal academic background in economics like most previous Fed chairs, so whether he would be able to avert a financial crisis remains to be seen, one of those sources said.

Powell, 64, who studied law, will be the first Fed chair in four decades without a doctorate in economics. After years on Wall Street and later in the U.S. Treasury Department, he became a member of the Fed’s board of governors in 2012 after being nominated by then-U.S. President Barack Obama.

If Powell’s appointment is confirmed by the U.S. Senate, he will take over the chairmanship of the Fed in February.

Over the past few years, Powell’s take on monetary policy has been largely in line with Yellen’s. Powell said in June that the Fed’s balance sheet, currently at $4.5 trillion, may not fall below $2.9 trillion within the next five years.

Powell’s coming to power will have a limited impact at most on China, a source close to the Monetary Policy Committee of the PBOC told Caixin. The volatility brought about by modest interest rate hikes likely will be short-lived, the person added.

“Powell doesn’t have a strong academic background (in economics). He may not have a deep understanding of asset bubbles, so maybe he will only be able to come up with adaptive measures at best. That’s what I would be worried about,” said Yao Yudong, former director general of the PBOC’s Research Institute of Banking and Finance.

Despite the starkly different approaches in regulating the financial system, what the U.S. may do will unlikely have a direct impact on China, sources within the PBOC and banking executives in China said.

“China’s financial market is relatively isolated from the U.S.,” a person close to the central bank’s financial stability committee told Caixin. China “is gradually increasing supervision, and strict enforcement of existing rules is also a manifestation of strong supervision.”

“The Federal Reserve and (the U.S.) Treasury Department share a consensus, and it’s highly possible for them to amend the Dodd-Frank banking reforms,” Yao said.

The Dodd-Frank Wall Street Reform and Consumer Protection Act, signed into law by Obama in 2010, aimed at tightening regulations over the financial industry. That reform was an aftermath of the financial crisis, with the goal of preventing systemic risks from building up.

“Many clauses of the Dodd-Frank Act require interpretation from implementing institutions, which puts the power to execute the law with the Office of the Comptroller of the Currency, a bureau that falls under the purview of the Department of the Treasury and the Federal Reserve,” said Wang Qiang, Wells Fargo senior vice president in charge of data risk management and small enterprise loans.

“Given this situation, the Federal Reserve has decisive power,” said Wang, adding that he expects regulators in the U.S. will transition from “regulation for the sake of regulation” to “smart regulation.”

Yao added: “In contrast to the U.S., China’s financial cycle is still in an expansionary period, and that requires strong supervision.”