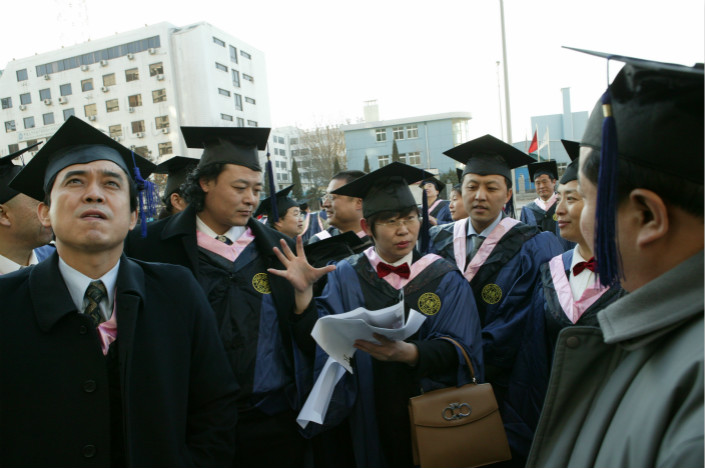 One of China’s top universities has been ordered to suspend its Executive MBA program due to lax oversight of recruitment and teaching quality, shedding light on a growing sector criticized for profiteering.

The command came after investigators uncovered irregularities with the program at Nankai University, in the northern port city of Tianjin, in March 2017, according to a leaked Ministry of Education internal circular that has been shared online since April 3.

The ministry pledged to hold to account those implicated of violating the rules regulating business courses in China.

Executive Master of Business Administration, or Executive MBA, postgraduate courses were first offered in China in 2002, and since then 64 Chinese universities have received approval from the ministry to run Executive MBA programs, according to the state-run Xinhua News Agency.

But the actual number of schools offering Executive MBA courses, which start at about 100,000 yuan ($15,900) a year and can cost as much as 600,000 yuan annually, could be much higher as they are highly lucrative. By comparison, an undergraduate student in China pays only a few thousand yuan in tuition fees a year.

Business schools in China are often criticized for running their Executive MBA programs as exclusive clubs for those with money and power to network at the expense of academic integrity.

Nankai was among the first 30 Chinese colleges to launch the Executive MBA programs in 2002 and it has since handed out 2,750 Executive MBA diplomas, according to the university. The two-year course costs a total 268,000 yuan.

More than 1,300 of the 2,750 students were required to have their prior degrees verified by the ministry upon their acceptance onto Nankai’s Executive MBA course because their previous degrees were obtained after 2001. However, 225 students failed to do so but were still admitted to the school, according to the ministry circular. When the 225 students were ordered by investigators to have their earlier degrees verified by last year, 113 failed to pass the verification process, the ministry said. That suggests that the students used fake degrees to apply for the course.

The university was also found to have violated government rules by paying 35 private institutions a total of 86 million yuan to help promote its Executive MBA program, according to the ministry. It also turned Executive MBA centers it launched in Beijing, Shanghai, Guangzhou, Shenzhen and Qingdao into cash cows by compromising admission requirements and teaching quality, the ministry said.

The Ministry of Education did not respond to Caixin’s inquiries into the authenticity of the leaked document, but an employee of Nankai University’s media center contacted by Caixin on Thursday said “management at the university is heartbroken over the problems uncovered in its Executive MBA program.”

The university is working to address the issues and is hopeful about resuming the program pending approval from the ministry, he said.

The irregularities found at Nankai are only the tip of the iceberg, according to professor Chu Zhaohui at the National Institute of Education Sciences. The root cause of such problems is a general lack of accountability at business schools that are granted the right to operate Executive MBA courses, he said.

“School operators might just think that they might as well use their licenses to make more money out of the Executive MBA courses as they are unlikely to be held to account if something goes wrong,” he said.

Independent institutions should be brought in to help accredit Executive MBA courses, and employers should also be given a voice in such accreditation to rein in abuse, according to Xiong Bingqi, a deputy director of the 21st Century Education Research Institute in Beijing.