Man Detained in Connection With Karaoke Fire That Killed 18 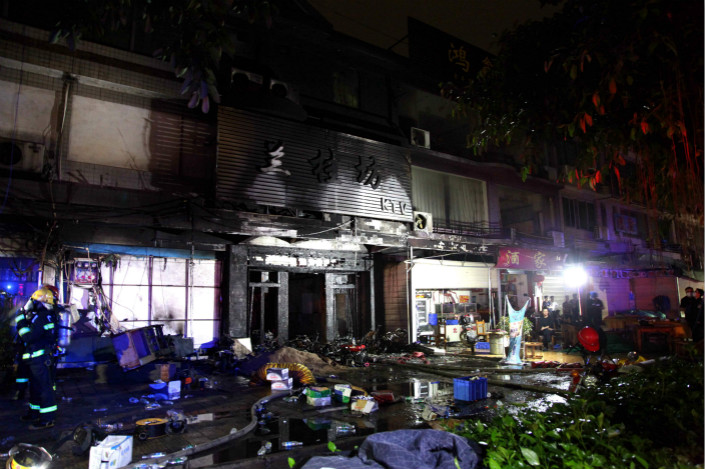 The karaoke parlor in Qingyuan, Guangdong province in which 18 people were killed in a blaze on Tuesday. Photo: VCG

Police have detained a man accused of starting a fire Tuesday that killed 18 people at a karaoke lounge in southern China’s Guangdong province.

Police said the man, Liu Chunlu, was drunk and argued with a person inside the venue, in the city of Qingyuan. During the argument, he rolled his motorbike into the entrance of the karaoke parlor and then set the vehicle ablaze, according to a statement released on the Qingyuan police’s official social media Weibo account.

It is unclear how many patrons were inside when the fire started. Most of the victims who died were young people, including 15 men and three women. Another five people are being treated at a local hospital for injuries that are not life-threatening, according to local police.

Liu, 32, confessed to starting the fire and was detained at his home Tuesday morning. Police did not say how officers tracked him down.

Prior to his detention, China’s national-level Ministry of Public Security dispatched a team of specialists to Qingyuan to assist in the investigation. Police in Qingyuan also offered a 200,000-yuan ($31,700) reward for information leading to his arrest.

The old three-story building housing the karaoke venue is privately owned, and neither its owner nor the firefighting authority in Qingyuan responded to Caixin’s questions about the building’s fire-safety certification.

Fatalities and economic losses caused by fires in China have declined in recent years, but the Fire Department of the Ministry of Public Security still recorded 312,000 fires in 2016, with 1,582 fatalities and 1,065 people injured. The department said 1,065 people were killed and 679 injured in 219,000 fires reported from January through October last year.