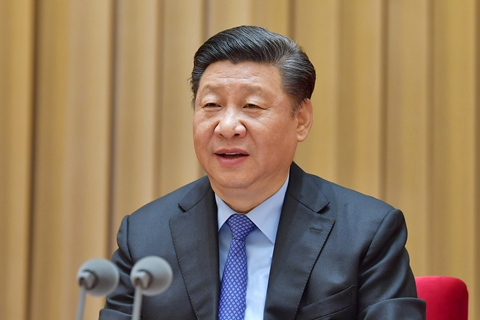 President Xi Jinping, who is also the party’s general secretary, heads the Foreign Affairs Commission, according to the official Xinhua News Agency. Premier Li Keqiang is the commission’s deputy head while Wang Qishan, the party’s former anti-corruption chief, is also a member of the committee, Xinhua reported.

Other heavyweight attendees include Politburo Standing Committee members Wang Huning and Han Zheng, though the report didn’t say whether they were members of the new commission.

The inaugural meeting of the Foreign Affairs Commission coincided with trade negotiations led by Vice Premier Liu He with U.S. officials this week in Washington seeking to resolve trade tensions between the two nations.

At the Tuesday meeting, Xi called for enhancing the centralized and unified leadership of the party over foreign affairs and highlighted the commission’s role in leading China’s diplomacy, according to Xinhua.

The Central Foreign Affairs Commission is a top decision-making and coordination body under the party’s Central Committee. It was upgraded from the Central Leading Group on Foreign Affairs in March in an overhaul of party and state institutions.

Xi highlighted uncertainties and challenges facing China in external affairs and said China should carefully weather the changing international environment and be prepared to tackle the challenges, Xinhua reported.

The president also pledged to further promote his signature Belt and Road Initiative, which involves $1.5 trillion in overseas infrastructure projects, as “an important platform” to push forward international cooperation and enhance China’s involvement in the global community, Xinhua reported.