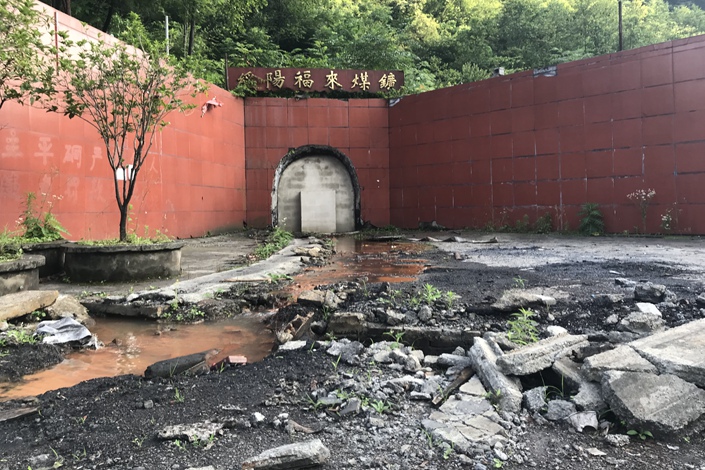 Wastewater flows out of a sealed shaft at the Suiyang Fulai Coal Mine in Guizhou province. Photo: Jing Jie/Caixin

Coal miner Ren Yunqing thought his life had hit rock bottom when he was diagnosed with black lung disease two years ago. But health problems were just the beginning of his troubles.

In July 2016, Ren was taken away by three plainclothes police officers over allegations that he was among hundreds of miners who had colluded with physicians to swindle payouts from a government-run medical insurance program using fraudulent diagnoses, he said.

“They used water bottles to hit me in the head, back and legs and kicked me in the face till my mouth began to bleed,” Ren, in his early 50s, said in a recent interview with Caixin.

The alleged mistreatment of Ren and other miners — mostly former farmers from impoverished areas — has raised questions about whether police in the area abused their power to protect powerful local businesses.

Before his detention, Ren was among dozens of workers from a mine in Guizhou province, in China’s southwest, who were embroiled in a fight with their employer over compensation and payouts for their illnesses.

Police from Guizhou’s Suiyang county who handled Ren’s case did not responded to Caixin’s questions about the alleged mistreatment of the workers at the Fulai Coal Mine.

Ren claims that interrogators grilled him on whether he paid doctors at the Guizhou Aerospace Hospital in the city of Zunyi to obtain a black lung diagnosis. Ren denies any involvement in the insurance scam.

He was then ordered to undergo a new examination commissioned by police, which police said concluded he did not have the illness. But Ren said no one would provide him with written results of the diagnosis.

He was released two days later, after he was warned to stop his fight or face more serious consequences, he told Caixin. A Caixin reporter saw visible scars on his back and legs, which Ren said were from torture.

Black lung disease, also known as coal worker’s pneumoconiosis, is caused by inhaling coal dust, and can lead to hardening of the lungs and impaired breathing. It is common among Chinese miners, due to insufficient workplace protections.

Since 2008, miners at Fulai have been provided one-use breathing masks, but several former workers said they were only given three per month.

Police in Zuiyi also detained three physicians from the hospital in 2016 for allegedly providing hundreds of workers with fraudulent black lung diagnoses in a 30 million yuan ($4.6 million) fraud. But police have not put forward any evidence for the collusion, and the miners say their diagnoses are genuine.

Dozens of the miners who were diagnosed by the physicians are employees of the Fulai mine, Caixin found. Under the law, they are entitled to a one-time compensation payment of roughly 100,000 yuan through the government system.

However, they said they have received only a fraction of that, which was distributed by their employer, and an additional 30,000 yuan each in compensation directly from the mine owner. Some fear that well-connected businessmen have embezzled portions of the payouts, according to Ren Huajun, the son of Ren Yunkai, another affected miner. They are not related to Ren Yunqing.

Ren Huajun said that his father, who passed away at 53 in May, was diagnosed with stage-one black lung disease at the Guizhou Aerospace Hospital. But in July 2016, his father was taken into police custody and locked up for nearly a month, and was beaten during interrogations.

Like Ren Yunqing, police required Ren Yunkai to undergo a new medical examination before he would be granted supervised release. That diagnosis confirmed the illness, according to the son.

However, his father did not receive any payout after he was released, as the investigation into the alleged insurance fraud was still pending, the son said.